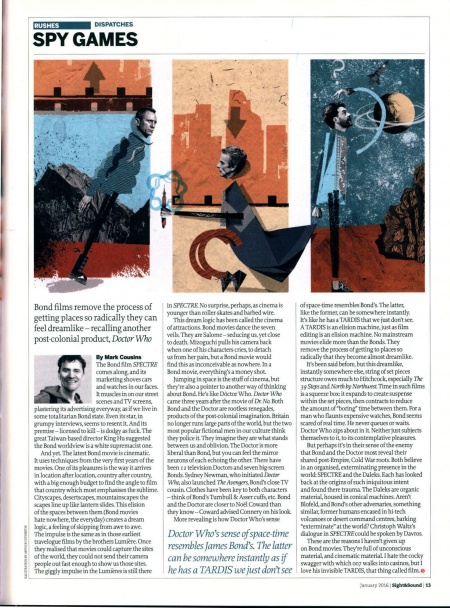 Bond films remove the process of getting places so radically they can feel dreamlike — recalling another post-colonial product, Doctor Who

The Bond film SPECTRE comes along, and its marketing shoves cars and watches in our faces. It muscles in on our street scenes and TV screens, plastering its advertising everyway, as if we live in some totalitarian Bond state. Even its star, in grumpy interviews, seems to resent it. And its premise — licensed to kill — is dodgy as fuck. The great Taiwan-based director King Hu suggested the Bond worldview is a white supremacist one.

And yet. The latest Bond movie is cinematic. It uses techniques from the very first years of the movies. One of its pleasures is the way it arrives in location after location, country after country, with a big enough budget to find the angle to film that country which most emphasises the sublime. Cityscapes, desertscapes, mountainscapes: the scapes line up like lantern slides. This elision of the spaces between them (Bond movies hate nowhere, the everyday) creates a dream logic, a feeling of skipping from awe to awe. The impulse is the same as in those earliest travelogue films by the brothers Lumiere. Once they realised that movies could capture the sites of the world, they could not send their camera people out fast enough to show us those sites. The giggly impulse in the Lumieres is still there in SPECTRE. No surprise, perhaps, as cinema is younger than roller-skates and barbed wire.

This dream logic has been called the cinema of attractions. Bond movies dance the seven veils. They are Salome — seducing us, yet close to death. Mizoguchi pulls his camera back when one of his characters cries, to detach us from her pain, but a Bond movie would find this as inconceivable as nowhere. In a Bond movie, everything's a money shot.

Jumping in space is the stuff of cinema, but they're also a pointer to another way of thinking about Bond. He's like Doctor Who. Doctor Who came three years after the movie of Dr. No. Both Bond and the Doctor are rootless renegades, products of the post-colonial imagination. Britain no longer runs large parts of the world, but the two most popular fictional men in our culture think they police it. They imagine they are what stands between us and oblivion. The Doctor is more liberal than Bond, but you can feel the mirror neurons of each echoing the other. There have been 12 television Doctors and seven big-screen Bonds. Sydney Newman, who initiated Doctor Who, also launched The Avengers, Bond's close TV cousin. Clothes have been key to both characters — think of Bond's Turnbull & Asser cuffs, etc. Bond and the Doctor are closer to Noel Coward than they know — Coward advised Connery on his look.

More revealing is how Doctor Who's sense of space-time resembles Bond's. The latter, like the former, can be somewhere instantly. It's like he has a TARDIS that we just don't see. A TARDIS is an elision machine, just as film editing is an elision machine. No mainstream movies elide more than the Bonds. They remove the process of getting to places so radically that they become almost dreamlike.

It's been said before, but this dreamlike, instantly somewhere else, string of set pieces structure owes much to Hitchcock, especially The 39 Steps and North by Northwest Time in such films is a squeeze box: it expands to create suspense within the set pieces, then contracts to reduce the amount of "boring" time between them. For a man who flaunts expensive watches, Bond seems scared of real time. He never queues or waits. Doctor Who zips about in it. Neither just subjects themselves to it, to its contemplative pleasures.

But perhaps it's in their sense of the enemy that Bond and the Doctor most reveal their shared post-Empire, Cold War roots. Both believe in an organised, exterminating presence in the world: SPECTRE and the Daleks. Each has looked back at the origins of such iniquitous intent and found there trauma. The Daleks are organic material, housed in conical machines. Aren't Blofeld, and Bond's other adversaries, something similar, former humans encased in hi-tech volcanoes or desert command centres, barking "exterminate" at the world? Christoph Waltz's dialogue in SPECTRE could be spoken by Davros.

These are the reasons I haven't given up on Bond movies. They're full of unconscious material, and cinematic material. I hate the cocky swagger with which 007 walks into casinos, but I love his invisible TARDIS, that thing called film.