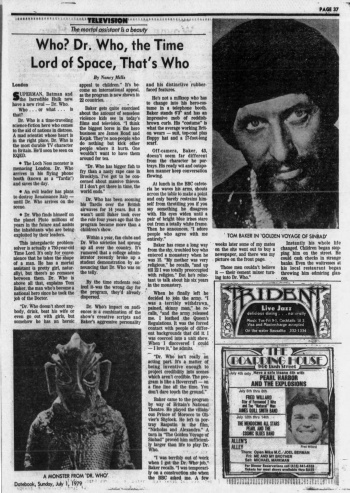 LONDON — Superman, Batman and the Incredible Hulk now have a new rival Dr. Who.

Who... or what is that? It's the latest BBC series to cross the Atlantic and it airs Monday-Friday on Channel 52.

Dr. Who is a time-traveling science fiction hero who comes to the aid of nations in distress. A mad scientist whose heart is in the right place, Dr. Who is the most durable TV character in Britain.

The Loch Ness Monster is menacing London. Dr. Who arrives in his flying phone booth (known as "Tardis") and saves the day.

An evil leader has plans to destroy Renaissance Italy — until Dr. Who arrives on the scene.

Dr. Who finds himself on the planet Pluto millions of years in the future and assists the inhabitants who are being exploited by their leaders.

This intergalactic problem-solver is actually a 750year-old Time Lord. It's only for convenience that he takes the shape of a man. He has a mortal assistant (a pretty girl, naturally), but there's no romance between them. Dr. Who is above all that, explains Tom Baker, the man who's become a national hero here since he took the job of the Doctor. "Dr. Who doesn't shoot anybody, drink, beat his wife or even go out with girls, but somehow he has an heroic appeal to children." It's become an international appeal, as the program is now shown in 22 countries. Baker is vocal about the amount of senseless violence kids see in today's films and television. "I think the biggest bores in the hero business are James Bond and Kojak. They're non-people who do nothing but kick other people where it hurts. One wouldn't want to have them around for tea.

"Dr. Who has bigger fish to fry than a nasty rape case in Brooklyn. I've got to be concerned about massive thieves. If I don't get there in time, the world ends." Dr. Who has been zooming his Tardis over the British airwaves for 14 years. But it wasn't until Baker took over the role four years ago that the program became more than a children's show. Within a year, fan clubs and Dr. Who societies had sprung up all over the country. It's rumored that a college administrator recently broke up a student demonstration by announcing that Dr. Who was on the telly. By the time the students realized it was the wrong day for the program, they'd already dispersed.

Dr. Who's impact on audiences is a combination of the show's creative scripts and Baker's aggressive personality and his distinctive rubber-faced features. He's not a milksop who has to change into his hero-costume in a telephone booth. Baker stands 6'3" and has an impressive mop of reddish-brown curls. His "costume" is what the average working Briton wears — suit and topcoat — plus floppy hat and a 17 foot-long scarf,

Off-camera, Baker, 43, doesn't seem far different from the character he portrays. His ready wit and outspoken manner keep conversation flowing. At lunch in the BBC cafeteria he waves his arms, shouts across the table to make a point and only barely restrains himself from throttling you if you say something he disagrees with. His eyes widen until a pair of bright blue irises stare out from a totally white frame. Then he announces, "I adore people who agree with me entirely."

Baker has come a long way from the shy, troubled boy who entered a monastery when he was 15. "My mother was very religious," he recalls, "and up till 22 I was totally preoccupied with religion." But he's reluctant to talk about his six years in the monastery.

When he finally left he decided to join the army. "I was a terribly withdrawn, pained, skinny man," he recalls, "and the army released me. I loathed the Queen's Regulations. It was the forced contact with people of different backgrounds that did it. I was coerced into a unit show. When I discovered I could make people laugh it gave me new strength."

Luckily for him, Dr. Who is supposed to have a sense of humor, a trait Baker plays up to the hilt. "The all-time bad line — I love it," he admits.

"Dr. Who isn't really an acting part. It's a matter of being inventive enough to project credibility into scenes which aren't credible. The program is like a hovercraft — on a fine line all the time. You don't dare touch the ground."