Stark mad to be Doc 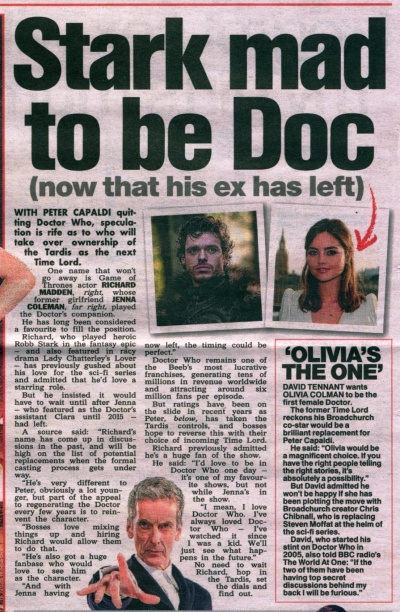 (now that his ex as left)

WITH PETER CAPALDI quitting Doctor Who, speculation is rife as to who will take over ownership of the Tardis as the next Time Lord.

He has long been considered a favourite to fill the position.

Richard, who played heroic Robb Stark in the fantasy epic — and also featured in racy drama Lady Chatterley's Lover — has previously gushed about his love for the sci-fi series and admitted that he'd love a starring role.

But he insisted it would have to wait until after Jenna — who featured as the Doctor's assistant Clara until 2015 — had left.

A source said: "Richard's name has come up in discussions in the past, and will be high on the list of potential replacements when the formal casting process gets under way.

"He's very different to Peter, obviously a lot younger, but part of the appeal to regenerating the Doctor every few years is to reinvent the character.

"Bosses love mixing things up and hiring Richard would allow them to do that.

"He's also got a huge fanbase who would love to see him as the character.

"And with Jenna having now left, perfect."

Doctor Who remains one of the Beeb's most lucrative franchises, generating tens of millions in revenue worldwide and attracting around six million fans per episode.

But ratings have been on the slide in recent years as Peter, below, has taken the Tardis controls, and bosses hope to reverse this with their choice of incoming Time Lord. Richard previously admitted he's a huge fan of the show. He said: "I'd love to be in

Doctor Who one day — it's one of my favourite shows, but not while Jenna's in the show.

"I mean, I love Doctor Who. I've always loved Doctor Who — I've watched it since I was a kid. We'll just see what happens in the future." No need to wait Richard, hop in the Tardis, set the dials and find out.

The former Time Lord reckons his Broadchurch co-star would be a brilliant replacement for Peter Capaldi.

He said: "Olivia would be a magnificent choice. If you have the right people telling the right stories, it's absolutely a possibility."

But David admitted he won't be happy if she has been plotting the move with Broadchurch creator Chris Chibnall, who is replacing Steven Moffat at the helm of the sci-fi series.

David, who started his stint on Doctor Who in 2005, also told BBC radio's The World At One: "If the two of them have been having top secret discussions behind my back I will be furious."