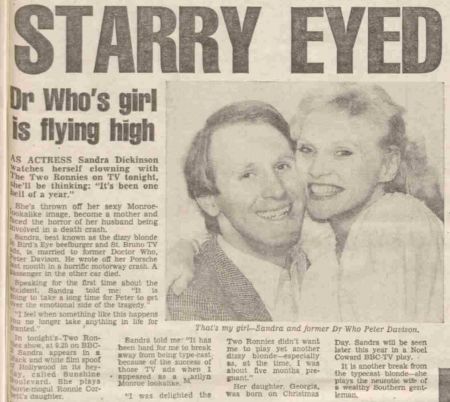 Dr Who's girl is flying high

AS ACTRESS Sandra Dickinson watches herself clowning with The Two Ronnie on TV tonight, she'll be thinking: "It's been one hell of a year."

She's thrown off her sexy Monroe-lookalike image, become a mother and faced the horror of her husband being involved in a death crash.

Sandra, best known as the dizzy blonde In Bird's Eye beefburger and St. Bruno TV ads, is married to former Doctor Who; Peter Davison. He wrote off her Porsche last month In a horrific motorway crash. A passenger In the other car died.

Speaking for the first time about the accident, Sandra told me: "It Is going to take a long time for Peter to get over the emotional side of the tragedy..'

"I feel when something like this happens you no longer take anything in life for granted."

Caption: That's my girl-Sandra and former Dr Who Peter Davison.