Sylvester's new look as Dr. Who 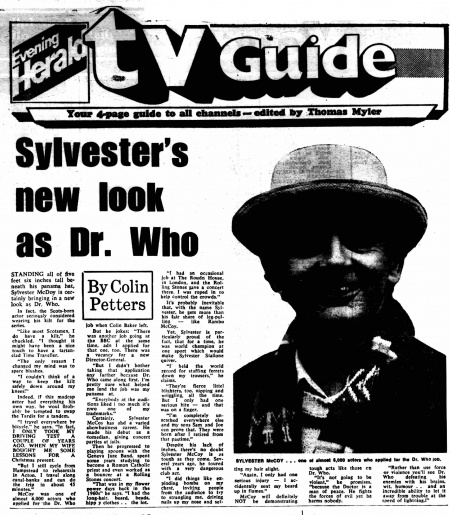 STANDING all of five feet six inches tall beneath his panama hat, Sylvester McCoy is certainly bringing in a new look as Dr. Who.

In fact, the Scots-born actor seriously considered wearing his kilt for the series.

"Like most Scotsmen, I do have a kilt," he chuckled. "I thought it might have been a nice touch to have a tartan-clad Time Traveller.

"The only reason I changed my mind was to spare blushes.

"I couldn't think of a way to keep the kilt safely down around my knees!"

Indeed, if this madcap actor had everything his own way. he woul Orob-ably be tempted to swap the Tardis for a tandem.

"I travel everywhere by bicycle," he says. "In fact, I ONLY TOOK MY DRIVING TEST A COUPLE OF YEARS AGO. WHEN MY WIFE BOUIHT ME SOME LESSONS FOR A Christmas present.

"But I still cycle from Hampstead to rehearsals in Acton. I travel along canal-banks and can do the trip in about 45 minutes."

McCoy was one of almost 6,000 actors who applied for the Dr. Who job when Colin Baker left.

But he jokes: "There was another job going at the BBC at the same time, and I applied for that one, too. There was a vacancy for a new Director-General.

"But I didn't bother taking that application any further because Dr. Who came along first. I'm pretty sure what helped me land the job was my panama at.

"Everybody at the auditions liked i tso much it's nwo one of my trademarks."

Certainly, Sylvester McCoy has and a varied showbusiness career. He made his debut as a comedian, giving concert parties at jails.

Then he progressed to Playing spoons with the Geneva Jazz Band, spent some years studying to become a Roman Catholic priest and even worked as a bouncer at a Rolling Stones concert.

"I had an occasional job at The Roudn House, in London, and the Rolling Stones gave a concert there. I was roped in to help control the crowds."

It's probably Inevitable that, with the name Sylvester, he gets more than his fair share of leg-pulling — like Rambo McCoy.

Yet, Sylvester is particularly proud of the fact, that for a time, he was world champion at one sport which would make Sylvester Stallone quiver.

"I held the world record for stuffing ferrets down my trousers," he claims.

"They're fierce littel blighters, too, nipping and wriggling, all the time. But I only had one serious bite — and that was on a finger.

"I'm completely unscathed everywhere else and my sons Sam and Joe can prove that. They were born after I retired from that pastime."

Despite his lack of inches, there's no doubt Sylvester McCoy is as tough as they come. Several years ago, he toured with a very dangerous club act.

"I did things like exploding bombs on my chest, inviting people from the audience to try to strangling me, driving nails up my nose and setting my hair alight.

"Again, I only had one serious injury — I accidentally sent my beard up in flames."

McCoy will definitely NOT be demonstrating tough acts like those on Dr. Who.

"It's not going to be violent," he promises, "because the Doctor is a man of peace. He fights the forces of evil yet he harms nobody.

"Rather than use force or violence you'll see Dr. Who defeating his enemies with his brains, wit, humour .. and an incredible ability to let it away from trouble at the speed of lightning.!"

Caption: SYLVESTER McCOY ... one of almost 6,000 actors who applied for the Dr. Who job.