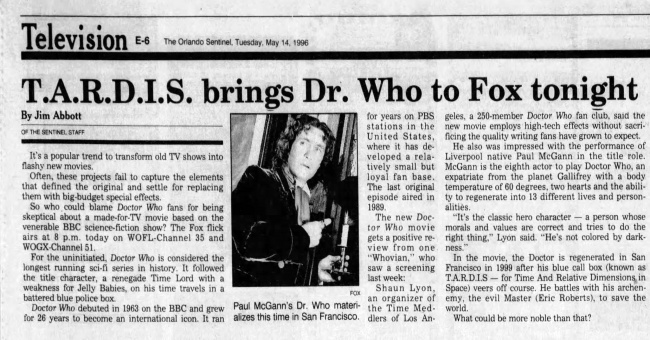 It's a popular trend to transform old TV shows into flashy new movies.

Often, these projects fail to capture the elements that defined the original and settle for replacing them with big-budget special effects

So who could blame Doctor Who fans for being skeptical about a made-for-TV movie based on the venerable BBC science-fiction show? The Fox flick airs at 8 p.m. today on WOFL-Channel 35 and WOGX-Channel 51.

For the uninitiated, Doctor Who is considered the longest running sci-fi series in history. It followed the title character, a renegade Time Lord with a weakness for Jelly Babies, on his time travels in a battered blue police box.

Doctor Who debuted in 1963 on the BBC and grew for 26 years to become an international icon. It ran for years on PBS stations in the United States, where it has developed a relatively small but loyal fan base. The last original episode aired in 1989.

The new Doctor Who movie gets a positive review from one "Whovian," who saw a screening last week:

Shaun Lyon, an organizer of the Time Meddlers of Los Angeles, a 250-member Doctor Who fan club, said the new movie employs high-tech effects without sacrificing the quality writing fans have grown to expect.

He also was impressed with the performance of Liverpool native Paul McGann in the title role. McGann is the eighth actor to play Doctor Who, an expatriate from the planet Gallifrey with a body temperature of 60 degrees, two hearts and the ability to regenerate into 13 different lives and personalities.

"It's the classic hero character - a person whose morals and values are correct and tries to do the right thing," Lyon said. "He's not colored by darkness."

In the movie, the Doctor is regenerated in San Francisco in 1999 after his blue call box (known as T.A.R.D.I.S - for Time And Relative Dimensions in Space) veers off course. He battles with his archenemy, the evil Master (Eric Roberts), to save the world.

What could be more noble than that