TARDIS gathering has links to area 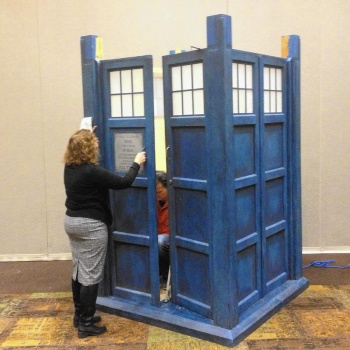 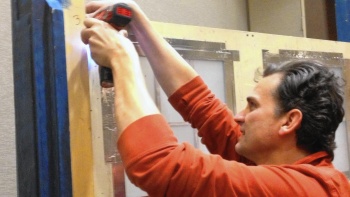 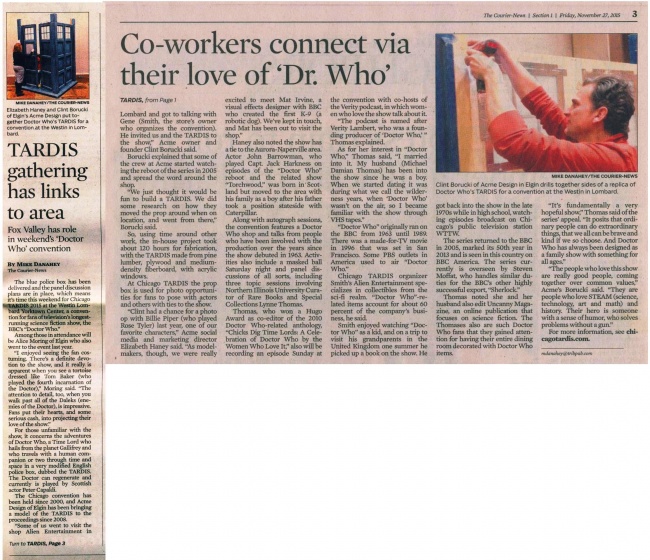 Fox Valley has role in weekend's 'Doctor Who' convention

The blue police box has been delivered and the panel discussion plans are in place, which means it's time this weekend for Chicago TARDIS 2015 at the Westin Lombard Yorktown Center, a convention for fans of television's longest-running science fiction show, the BBC's "Doctor Who."

Among those in attendance will be Alice Moring of Elgin who also went to the event last year.

"I enjoyed seeing the fan costuming. There's a definite devotion to the show, and it really is apparent when you see a tortoise dressed like Tom Baker (who played the fourth incarnation of the Doctor)," Moring said. "The attention to detail, too, when you walk past all of the Daleks (enemies of the Doctor), is impressive. Fans put their hearts, and some serious cash, into projecting their love of the show."

For those unfamiliar with the show, it concerns the adventures of Doctor Who, a Time Lord who hails from the planet Gallifrey and who travels with a human companion or two through time and space in a very modified English police box, dubbed the TARDIS. The Doctor can regenerate and currently is played by Scottish actor Peter Capaldi.

The Chicago convention has been held since 2000, and Acme Design of Elgin has been bringing a model of the TARDIS to the proceedings since 2008.

"Some of us went to visit the shop Alien Entertainment in Lombard and got to talking with Gene (Smith, the store's owner who organizes the convention). He invited us and the TARDIS to the show," Acme owner and founder Clint Borucki said.

Borucki explained that some of the crew at Acme started watching the reboot of the series in 2005 and spread the word around the shop.

"We just thought it would be fun to build a TARDIS. We did some research on how they moved the prop around when on location, and went from there," Borucki said.

So, using time around other work, the in-house project took about 120 hours for fabrication, with the TARDIS made from pine lumber, plywood and medium-density fiberboard, with acrylic windows.

At Chicago TARDIS the prop box is used for photo opportunities for fans to pose with actors and others with ties to the show.

"Clint had a chance for a photo op with Billie Piper (who played Rose Tyler) last year, one of our favorite characters," Acme social media and marketing director Elizabeth Haney said. "As model-makers, though, we were really excited to meet Mat Irvine, a visual effects designer with BBC who created the first K-9 (a robotic dog). We've kept in touch, and Mat has been out to visit the shop."

Haney also noted the show has a tie to the Aurora-Naperville area. Actor John Barrowman, who played Capt. Jack Harkness on episodes of the "Doctor Who" reboot and the related show "Torchwood," was born in Scotland but moved to the area with his family as a boy after his father took a position stateside with Caterpillar.

Along with autograph sessions, the convention features a Doctor Who shop and talks from people who have been involved with the production over the years since the show debuted in 1963. Activities also include a masked ball Saturday night and panel discussions of all sorts, including three topic sessions involving Northern Illinois University Curator of Rare Books and Special Collections Lynne Thomas.

Thomas, who won a Hugo Award as co-editor of the 2010 Doctor Who-related anthology, "Chicks Dig Time Lords: A Celebration of Doctor Who by the Women Who Love It," also will be recording an episode Sunday at the convention with co-hosts of the Verity podcast, in which women who love the show talk about it.

"The podcast is named after Verity Lambert, who was a founding producer of 'Doctor Who,' " Thomas explained.

As for her interest in "Doctor Who," Thomas said, "I married into it. My husband (Michael Damian Thomas) has been into the show since he was a boy. When we started dating it was during what we call the wilderness years, when 'Doctor Who' wasn't on the air, so I became familiar with the show through VHS tapes."

"Doctor Who" originally ran on the BBC from 1963 until 1989. There was a made-for-TV movie in 1996 that was set in San Francisco. Some PBS outlets in America used to air "Doctor Who."

Chicago TARDIS organizer Smith's Alien Entertainment specializes in collectibles from the sci-fi realm. "Doctor Who"-related items account for about 60 percent of the company's business, he said.

Smith enjoyed watching "Doctor Who" as a kid, and on a trip to visit his grandparents in the United Kingdom one summer he picked up a book on the show. He got back into the show in the late 1970s while in high school, watching episodes broadcast on Chicago's public television station WTTW.

The series returned to the BBC in 2005, marked its 50th year in 2013 and is seen in this country on BBC America. The series currently is overseen by Steven Moffat, who handles similar duties for the BBC's other highly successful export, "Sherlock."

Thomas noted she and her husband also edit Uncanny Magazine, an online publication that focuses on science fiction. The Thomases also are such Doctor Who fans that they gained attention for having their entire dining room decorated with Doctor Who items.

"It's fundamentally a very hopeful show," Thomas said of the series' appeal. "It posits that ordinary people can do extraordinary things, that we all can be brave and kind if we so choose. And Doctor Who has always been designed as a family show with something for all ages."

"The people who love this show are really good people, coming together over common values," Acme's Borucki said. "They are people who love STEAM (science, technology, art and math) and history. Their hero is someone with a sense of humor, who solves problems without a gun."

More that 2,000 Doctor Who fans expected for Chicago TARDIS 2015

Co-workers connect via their love of 'Dr. Who'