TARDIS in the yard 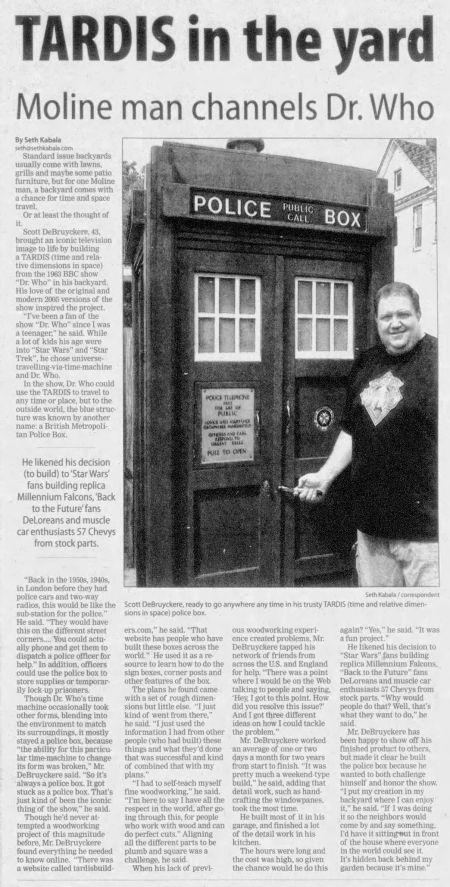 Standard issue backyards usually come with lawns, grills and maybe some patio furniture. but for one Moline man, a backyard comes with a chance for time and space travel.

Or at least the thought of it.

Scott DeBruyckere, 43, brought an iconic television image to life by building a TARDIS (time and relative dimensions in space) from the 1963 BBC show "Dr. Who" in his backyard. His love of the original and modern 2005 versions of the show inspired the project.

"I've been a fan of the show "Dr. Who" since I was a teenager," he said. While a lot of kids his age were into "Star Wars" and "Star Trek", he chose universe-travelling-via-time-machine and Dr. Who.

In the show, Dr. Who could use the TARDIS to travel to any time or place, but to the outside world, the blue structure was known by another name: a British Metropolitan Police Box.

"Back in the 1950s, 1940s, in London before they had police cars and two-way radios, this would be like the sub-station for the police." He said. "They would have this on the different street corners.... You could actually phone and get them to dispatch a police officer for help." In addition, officers could use the police box to store supplies or temporarily lock-up prisoners.

Though Dr. Who's time machine occasionally took other forms, blending into the environment to match its surroundings, it mostly stayed a police box, because "the ability for this particular time-machine to change its form was broken," Mr. DeBruyckere said. "So it's always a police box. It got stuck as a police box. That's just kind of been the iconic thing of the show," he said.

Though he'd never attempted a woodworking project of this magnitude before, Mr. DeBruyckere found everything he needed to know online. "There was a website called tardisbuilders.com," he said. "That website has people who have built these boxes across the world." He used it as a resource to learn how to do the sign boxes, corner posts and other features of the box.

The plans he found came with a set of rough dimensions but little else. "I just kind of went from there," he said. "I just used the information I had from other people (who had built) these things and what they'd done that was successful and kind of combined that with my plans."

"I had to self-teach myself fine woodworking," he said. "I'm here to say I have all the respect in the world, after going through this, for people who work with wood and can do perfect cuts." Aligning all the different parts to be plumb and square was a challenge, he said.

When his lack of previous woodworking experience created problems, Mr. DeBruyckere tapped his network of friends from across the U.S. and England for help. "There was a point where I would be on the Web talking to people and saying, 'Hey, I got to this point. How did you resolve this issue?' And I got three different ideas on how I could tackle the problem."

Mr. DeBruyckere worked an average of one or two days a month for two years from start to finish. "It was pretty much a weekend-type build," he said, adding that detail work, such as handcrafting the windowpanes, took the most time.

He built most of it in his garage, and finished a lot of the detail work in his kitchen.

The hours were long and the cost was high, so given the chance would he do this again? "Yes," he said. "It was a fun project."

He likened his decision to "Star Wars" fans building replica Millennium Falcons. "Back to the Future" fans DeLoreans and muscle car enthusiasts 57 Chevys from stock parts. "Why would people do that? Well, that's what they want to do," he said.

Mr. DeBruyckere has been happy to show off his finished product to others, but made it clear he built the police box because he wanted to both challenge himself and honor the show. "I put my creation in my backyard where I can enjoy it," he said. "If I was doing it so the neighbors would come by and say something. I'd have it sitting out in front of the house where everyone in the world could see it. It's hidden back behind my garden because it's mine."