TV for the family 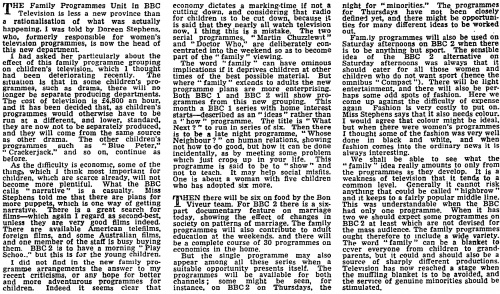 THE Family Programmes Unit in BBC .. Television is less a new province than a rationalisation of what was actually happening. I was told by Doreen Stephens, who, formerly responsible for women's television programmes, is now the head of this new department.

I had asked her particularly about the effect of this family programme grouping on children's television, which I thought had been deteriorating recently. The situation Is that in some children's programmes, such as drama, there will no longer be separate producing departments. The cost of television is £4,800 an hour, and it has been decided that, as children's programmes would otherwise have to be run at a different, and lower, standard, they are now not to be separately produced, and they will come from the same source as other drama. The other children's programmes such as "Blue Peter," 'Crackerjack," and so on, continue as before.

As the difficulty is economic, some of the things which I think most important for children, which are scarce already, will not become more plentiful. What the BBC calls "narrative" is a casualty. Miss Stephens told me that there are plans for more puppets which is one way of getting narrative. There is a great search for films—which again I regard as second-best, unless they are very good films indeed. There are available American telefilms, foreign films, and some Australian films, and one member of the staff Is busy buying them. BBC 2 is to have a morning Play School," but this is for the young children.

I did not find in the new family programme arrangements the answer to my recent criticisms, or any hope for better and more adventurous programmes for children. Indeed it seems clear that economy dictates a marking-time if not a cutting down, and considering that radio for children is to be cut down, because it is said that they nearly all watch television now, 1 thing this is a mistake. The two serial programmes, "Martin Chuzzlewit" and "Doctor Who," are deliberately concentrated into the weekend so as to become part of the " family " viewing.

The word family "can have ominous implications if it deprives children at other times of the best possible material. But where "family" extends to adults the new programme plans are more enterprising. Both BBC 1 and BBC 2 will show programmes from this new grouping. This month a BBC 1 series with home interest starts—described as an "ideas" rather than a "how" programme. The title is "What Next ?" to run in series of six. Then there is to be a late night programme, " Whose Neighbour? " on human relations, showing not how to do good, but how it can be done incidentally, as by meeting some problem which just crops up in your life. This programme is said to be to "show" and not to teach. It may help social misfits. One is about a woman with five children who has adopted six more.

THEN there will be six on food by the Bon Viveur team. For BBC 2 there is a six-part documentary feature on marriage today, showing the effect of changes in society on patterns of marriage. The family programmes will also contribute to adult education at the weekends. and there will be a complete course of 30 programmes on economics in the home.

But the single programme may also appear among all these series when a suitable opportunity presents itself. The programmes will be available for both channels; some might be seen, for instance, on BBC 2 on Thursdays, the night for "minorities." The programmes for Thursdays have not been closely defined yet, and there might be opportunities for many different ideas to be worked out.

Family programmes will also be used on Saturday afternoons on BBC 2 when there is to be anything but sport. The sensible idea of the BBC 2 alternative on Saturday afternoons was always that it should cater for all those women and children who do not want sport (hence the omnibus "Compact"). There will be light entertainment, and there will also be perhaps some odd spots of fashion. Here we come up against the difficulty of expense again Fashion is very costly to put on. Miss Stephens says that it also needs colour. I would agree that colour might be ideal. but when there were women's programmes I thought some of the fashion was very well done in black and white, and when fashion comes Into the ordinary news it is always interesting.

We shall be able to see what the "family" idea really amounts to only from the programmes as they develop. It is a weakness of television that it tends to a common level. Generally it cannot risk anything that could be called "highbrow" and it keeps to a fairly popular middle line. This was understandable when the BBC had only one programme. When it has two we should expect some programmes on BBC 2 at least which are not devised for the mass audience. The family programmes ought therefore to include a wide variety. The word "family" can be a blanket to cover everyone from children to grandparents, but it could and should also be a source of sharply different productions. Television has now reached a stage when the muffling blanket is to be avoided, and the service of genuine minorities should be stimulated.