Take a deep breath for dangerous new Doctor Who 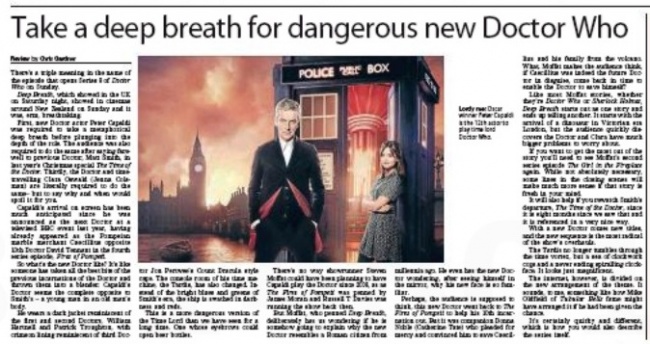 There's a triple meaning in the name of the episode that opens Series 8 of Doctor Who on Sunday.

Deep Breath, which showed in the UK on Saturday night, showed in cinemas around New Zealand on Sunday and it was, erm, breathtaking.

First, new Doctor actor Peter Capaldi was required to take a metaphorical deep breath before plunging into the depth of the role. The audience was also required to do the same after saying farewell to previous Doctor, Matt Smith, in last year's Christmas special The Time of the Doctor. Thirdly, the Doctor and timetravelling Clara Oswald (Jenna Coleman) are literally required to do the same– but to say why and when would spoil it for you.

Capaldi's arrival on screen has been much anticipated since he was announced as the next Doctor at a televised BBC event last year, having already appeared as the Pompeian marble merchant Caecillius opposite 10th Doctor David Tennant in the fourth series episode, Fires of Pompeii.

So what's the new Doctor like? It's like someone has taken all the best bits of the previous incarnations of the Doctor and thrown them into a blender. Capaldi's Doctor seems the complete opposite to Smith's – a young man in an old man's body.

He wears a dark jacket reminiscent of the first and second Doctors, William Hartnell and Patrick Troughton, with crimson lining reminiscent of third Doctor Jon Pertwee's Count Dracula style cape. The console room of his time machine, the Tardis, has also changed. Instead of the bright blues and greens of Smith's era, the ship is swathed in darkness and reds.

This is a more dangerous version of the Time Lord than we have seen for a long time. One whose eyebrows could open beer bottles.

There's no way showrunner Steven Moffat could have been planning to have Capaldi play the Doctor since 2008, as as The Fires of Pompeii was penned by James Moran and Russell T Davies was running the show back then.

But Moffat, who penned Deep Breath, deliberately has us wondering if he is somehow going to explain why the new Doctor resembles a Roman citizen from millennia ago. He even has the new Doctor wondering, after seeing himself in the mirror, why his new face is so familiar.

Perhaps, the audience is supposed to think, this new Doctor went back to The Fires of Pompeii to help his 10th incarnation out. But it was companion Donna Noble (Catherine Tate) who pleaded for mercy and convinced him to save Caecillius and his family from the volcano. What, Moffat makes the audience think, if Caecillius was indeed the future Doctor in disguise, come back in time to enable the Doctor to save himself?

Like most Moffat stories, whether they're Doctor Who or Sherlock Holmes, Deep Breath starts out as one story and ends up telling another. It starts with the arrival of a dinosaur in Victorian era London, but the audience quickly discovers the Doctor and Clara have much bigger problems to worry about.

If you want to get the most out of the story you'll need to see Moffat's second series episode The Girl in the Fireplace again. While not absolutely necessary, some lines in the closing scenes will make much more sense if that story is fresh in your mind.

It will also help if you rewatch Smith's departure, The Time of the Doctor, since it is eight months since we saw that and it is referenced in a very nice way.

With a new Doctor comes new titles, and the new sequence is the most radical of the show's overhauls.

The Tardis no longer tumbles through the time vortex, but a sea of clockwork cogs and a never ending spiralling clockface. It looks just magnificent.

The internet, however, is divided on the new arrangement of the theme. It sounds, to me, something like how Mike Oldfield of Tubular Bells fame might have arranged it if he had been given the chance.

It's certainly quirky and different, which is how you would also describe the series itself.