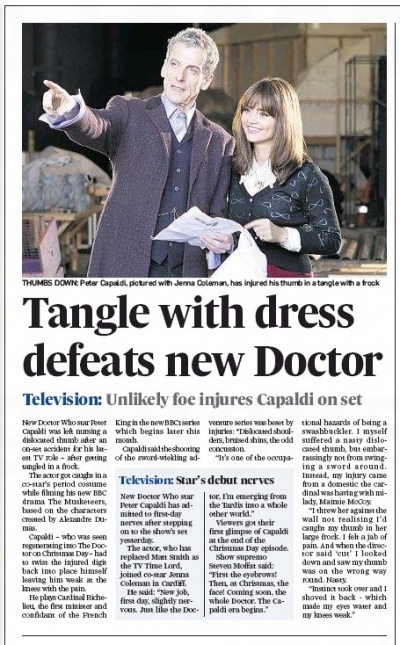 New Doctor Who star Peter Capaldi was left nursing a dislocated thumb after an on-set accident for his latest TV role – after getting tangled in a frock. THUMBS DOWN: Peter Capaldi, pictured Jenna Coleman, has injured his thumb in a tangle with a frock

The actor got caught in a co-star's period costume while filming his new BBC drama The Musketeers, based on the characters created by Alexandre Dumas.

Capaldi – who was seen regenerating into The Doctor on Christmas Day – had to twist the injured digit back into place himself leaving him weak at the knees with the pain.

He plays Cardinal Richelieu, the first minister and confidant of the French King in the new BBC1 series which begins later this month.

Capaldi said the shooting of the sword-wielding adventure series was beset by injuries: "Dislocated shoulders, bruised shins, the odd concussion.

"It's one of the occupational hazards of being a swashbuckler. I myself suffered a nasty dislocated thumb, but embarrassingly not from swinging a s word around. Instead, my injury came from a domestic the cardinal was having with milady, Maimie McCoy.

"I threw her against the wall not realising I'd caught my thumb in her large frock. I felt a jab of pain. And when the director said ' cut' I looked down and saw my thumb was on the wrong way round. Nasty.

"Instinct took over and I shoved it back - which made my eyes water and my knees weak."