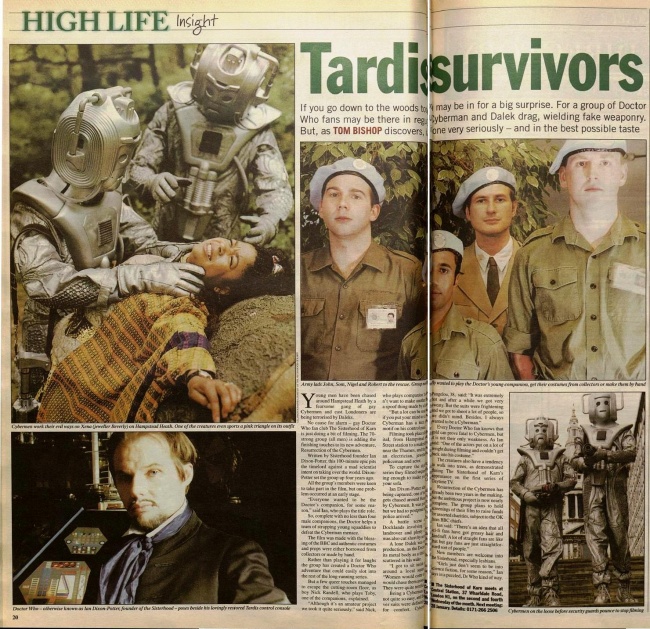 If you go down to the woods for my be in for a big surprise. For a group of Doctor Who fans may be there in Cybermen and Dalek grag, wielding fake weaponry. But, as Tom Bishop discovers, one very seriously -- and in the best possible taste.

Young men chased around Hampstead Heath by a fearsome gang of gay Cybermen and east Londoners are being terrorised by Daleks.

No cause for alarm -- the gay Doctor Who fan club The Sisterhood of Karn is just doing a bit of filming. The 70-strong group (all men) is adding the finishing touches to its new adventure, Resurrection of the Cybermen.

Written by a Sisterhood founder Ian Dixon-Potter, this 100-minute epic pits the timeloard against a mad scientist intent on taking over the whole world. Dixon-Potter set up the group four years ago.

All the group's members take part, but one problem occurred in release day.

"Everyone wanted to be Doctor companion, for some reason," said Ian, who plays the title role.

So, complete with no less than four male companions, the Doctor helps the team of strapping young squaddies to defeat the Cyberman menace.

The film was made with a blessing of BBC and authentic costumes and props were either borrowed from collectors or made by hand.

Rather than playing it for laughts the group has created a Doctor Who adventure that could easily slot into the rest of the long-running series.

But a few queer touches managed to escape the cutting room floor, as boy Nick Randell, who plays Toby, one of the companions, explains.

"Although it's an amateur project, we took it quite seriously," said Nick, who plays compaion Toby. ... didn't want to make another ... a spoof thing made by a ...

Filming took place ... from Hampstead ... Street station to a makeshift ... near the Thames, and ... an electrician, ... policeman and actor.

Being a Cyberman ... not quite so easy, and the ... suits were ... for comfort. Cybermen ... Pangelou, 38, said: "It was extremely hot and after a while we got very sweaty. But the suits were frightening and we got to shoot a lot of people, so we didn't mind. Besides, I always wanted to be a Cyberman."

Every Doctor Who fan nows that gold can prove fatal to Cybermen, but it is not their only weakness. As Ian said: "One of the actors put on a lot of weight during filming and couldn't get back into his costume."

The creatures also have a tendency to walk into trees, demonstrated during the Sisterhood of Karn's appearance on the first series of Gaytime TV.

Resurrection of the Cybermen has already been two years in the making, but the ambitious project is now nearly complete. The group plans to hold screenings of their film to raise funds for assorted cherries, subject to the OK from BBC chiefs.

Ian saide" "There's an idea that all sci-fi fans have gotd greasy hair and dandruff. A lot of straight fans are like that but gay fans are just straightforward sort of people."

New members are welcome into the Sisterhood, especially lesbians.

"Girls just don't seem to be into science fiction, for some reason," Ian says in a puzzled, Dr Who kind of way."

The Sisterhood of Karn meets at Central Station, 37 Wharfdale Road, London N1, on the second and fourth Wednesday of the month. Next meeing: 28 January.

Cybermen work their evil ways on Xena (Jeweller Beverly) on Hampstead Heath. One of the creatures even sports a pink triangle on its outfit

Doctor Who -- otherwise known as Ian Dixon-Potter, founder of the Sisterhood - poses beside his loving restored Tardis control console

Caption: Army lads John, Som, Nigel and Robert to the rescue. Group wanted to play the Doctor's young companion, get their costumes from collectors or make them by hand

Caption: Cybermen on the loose before security guards pounce to stop filming.