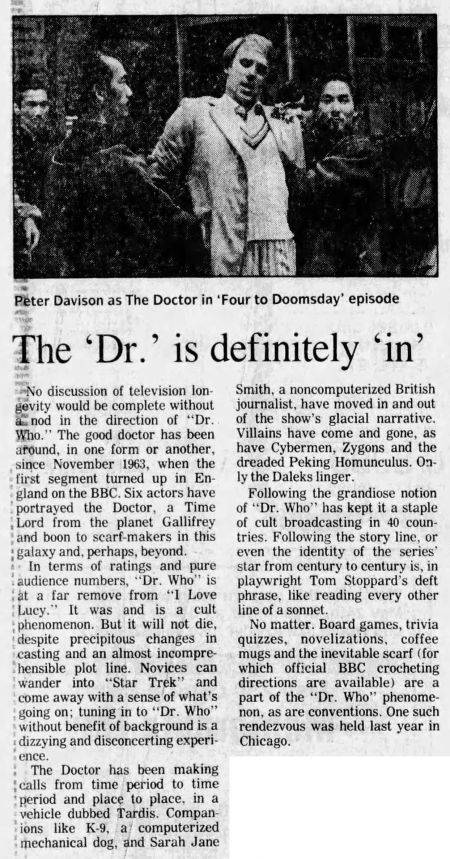 No discussion of television longevity would be complete without a nod in the direction of "Dr. Who." The good doctor has been around, in one form or another, since November 1963, when the first segment turned up in England on the BBC. Six actors have portrayed the Doctor, a Time Lord from the planet Gallifrey and boon to scarf-makers in this galaxy and, perhaps, beyond.

In terms of ratings and pure audience numbers, "Dr. Who" is at a far remove from "I Love Lucy." It was and is a cult phenomenon. But it will not die, despite precipitous changes in casting and an almost incomprehensible plot line. Novices can wander into "Star Trek" and come away with a sense of what's going on; tuning in to "Dr. Who" without benefit of background is a dizzying and disconcerting experience.

The Doctor has been making calls from time period to time period and place to place, in a vehicle dubbed Tardis. Companions like K-9, a computerized mechanical dog, and Sarah Jane Smith, a noncomputerized British journalist, have moved in and out of the show's glacial narrative. Villains have come and gone, as have Cybermen, Zygons and the dreaded Peking Homunculus. Only the Daleks linger.

Following the grandiose notion of "Dr. Who" has kept it a staple of cult broadcasting in 40 countries. Following the story line, or even the identity of the series' star from century to century is, in playwright Tom Stoppard's deft phrase, like reading every other line of a sonnet.

No matter. Board games, trivia quizzes, novelizations, coffee mugs and the inevitable scarf (for which official BBC crocheting directions are available) are a part of the "Dr. Who" phenomenon, as are conventions. One such rendezvous was held last year in Chicago.

Caption: Peter Davison as The Doctor in 'Four to Doomsday' episode