The Daleks are Here! 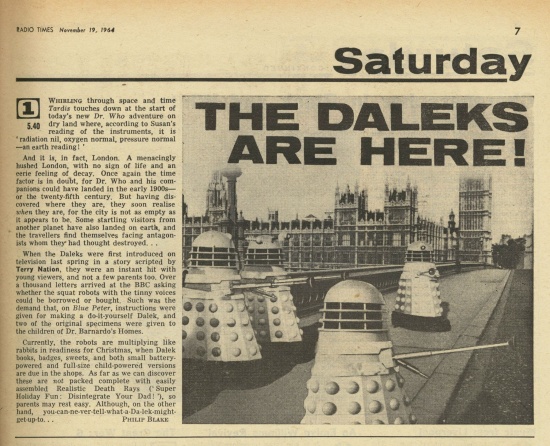 WHIRLING through space and time Tardis touches down at the start of today's new Dr. Who adventure on dry land where, according to Susan's reading of the instruments, it is ' radiation nil, oxygen normal, pressure normal —an earth reading ! '

And it is, in fact, London. A menacingly hushed London, with no sign of life and an eerie feeling of decay. Once again the time factor is in doubt, for Dr. Who and his companions could have landed in the early 1900s—or the twenty-fifth century. But having discovered where they are, they soon realise when they are, for the city is not as empty as it appears to be. Some startling visitors from another planet have also landed on earth, and the travellers find themselves facing antagonists whom they* had thought destroyed.. .

When the Daleks were first introduced on television last spring in a story scripted by Terry Nation, they were an instant hit with young viewers, and not a few parents too. Over a thousand letters arrived at the BBC asking whether the squat robots with the tinny voices could be borrowed or bought. Such was the demand that, on Blue Peter, instructions were given for making a do-it-yourself Dalek, and two of the original specimens were given to the children of Dr. Barnardo's Homes.

Currently, the robots are multiplying like rabbits in readiness for Christmas, when Dalek books, badges, sweets, and both small battery-powered and full-size child-powered versions are due in the shops. As far as we can discover these are not packed complete with easily assembled Realistic Death Rays (' Super Holiday Fun : Disintegrate Your Dad ! '), so parents may rest easy. Although, on the other hand, you-can-ne-ver-tell-what-a-Da-lek-rnight-get-up-to...