The Daleks go on for ever 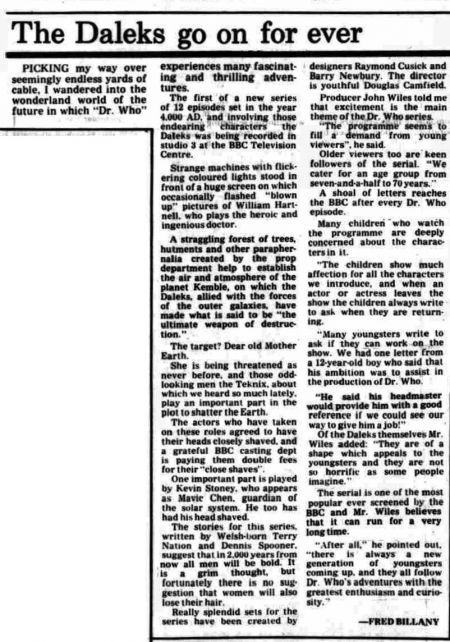 PICKING my way over seemingly endless yards of cable, I wandered into the wonderland world of the future in which "Dr. Who" experiences many fascinating and thrilling adventures.

The first of a new series of 12 episodes set in the year 4,000 AD, and involving those endearing characters the Daleks was being recorded in studio, 2 at the BBC Television Centre.

Strange machines with flickering coloured lights stood in front of a huge screen on which occasionally flashed blown up" pictures of William Hartnell, who plays the heron and ingenious doctor.

A straggling forest of trees, hutments, and other paraphernalia created by the prop department help to establish the air and atmosphere of the planet Kemble, on which the Daleks, allied with the forces of the outer galaxies, have made what is said to be "the ultimate weapon of destruction."

She is being threatened as never before, and those odd-looking men the Telnix, about which we heard so much lately, play an important part in the plot to shatter the Earth.

The actors who have taken on these rules agreed to have their heads closely shaved and grateful BBC casting dept is paying them double fees for their "close shaves".

One important part is played by Kevin Stoney, who appears as Mavic Chen, guardian of the solar system. He too has had his head shaved.

The stories for this series written by Welsh-born Terry Nation and Dennis Spooner, suggest that in 2,000 years from now all men will be bold. It is a grim thought, but fortunately there is no suggestion that women will also lose their hair.

Really splendid sets for the series have been created designers Raymond Cusick and Barry Newbury. The director is youthful Douglas Camfield.

Producer John Wiles told me that excitement is the main theme of the Dr Who series "The programme seems to fill a demand from young viewers", he said

Older viewers too are keen followers of the serial. "We cater for an age group from seven-and-a-half to 70 years."

A shoal of letters reaches the BBC after every Dr. Who episode.

Many children who watch the programme are deeply concerned about the characters in it.

"The children show much affection for a11 the characters we introduce, and when an actor or actresses leaves the show the children always write to ask when they are return."

"Many youngsters write to ask if they can work on the show. We had one letter from a 12-year-old boy who said that his ambition was to assist in the production of Dr. Who.

"He said his headmaster would provide him with a good reference if we could see our way to give him a job!"

Of the Daleks themselves Mr Wiles added: "They are of shape which appeals to the youngsters and they are not so horrific as some people imagine."

The serial is one of the most popular ever screened by the BBC and Mr. Wiles believes that it can run for a very long time.

"After all," he pointed out, "there is always a new generation of youngsters coming up, and they all follow Dr Who's adventures with the greatest enthusiasm and curiosity."