The Daleks mean business this time 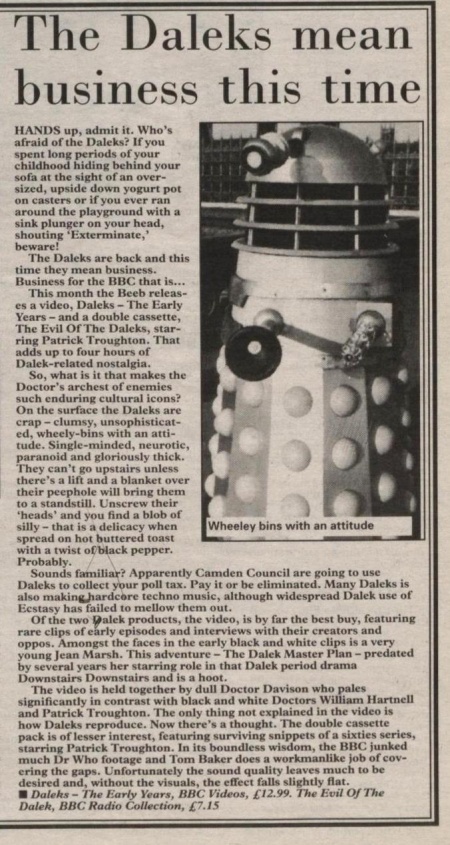 HANDS up, admit it. Who's afraid of the Daleks? If you spent long periods of your childhood hiding behind your sofa at the sight of an oversized, upside down yogurt pot on casters or if you ever ran around the playground with a sink plunger on your head, shouting 'Exterminate,' beware!

The Daleks are back and this time they mean business. Business for the BBC that is...

This month the Beeb releases a video, Daleks - The Early Years - and a double cassette, The Evil Of The Daleks, starring Patrick Troughton. That adds up to four hours of Dalek-related nostalgia.

So, what is it that makes the Doctor's archest of enemies such enduring cultural icons? On the surface the Daleks are crap - clumsy, unsophisticated, wheely-bins with an attitude. Single-minded, neurotic, paranoid and gloriously thick. They can't go upstairs unless there's a lift and a blanket over their peephole will bring them to a standstill. Unscrew their 'heads' and you find a blob of silly - that is a delicacy when spread on hot buttered toast with a twist of black pepper. Probably.

Sounds familiar? Apparently Camden Council are going to use Daleks to collectly your poll tax. Pay it or be eliminated. Many Daleks is also making hardcore techno music, although widespread Dalek use of Ecstasy has failed to mellow them out.

Of the two Dalek products, the video, is by far the best buy, featuring rare clips of early episodes and interviews with their creators and oppos. Amongst the faces in the early black and white clips is a very young Jean Marsh. This adventure - The Dalek Master Plan - predated by several years her starring role in that Dalek period drama Downstairs Downstairs and is a hoot.

The video is held together by dull Doctor Davison who pales significantly in contrast with black and white Doctors William Hartnell and Patrick Troughton. The only thing not explained in the video is how Daleks reproduce. Now there's a thought. The double cassette pack is of lesser interest, featuring surviving snippets of a sixties series, starring Patrick Troughton. In its boundless wisdom, the BBC junked much Dr Who footage and Tom Baker does a workmanlike job of covering the gaps. Unfortunately the sound quality leaves much to be desired and, without the visuals, the effect falls slightly flat.

Caption: Wheeley bins with an attitude