The Destiny of the Doctor 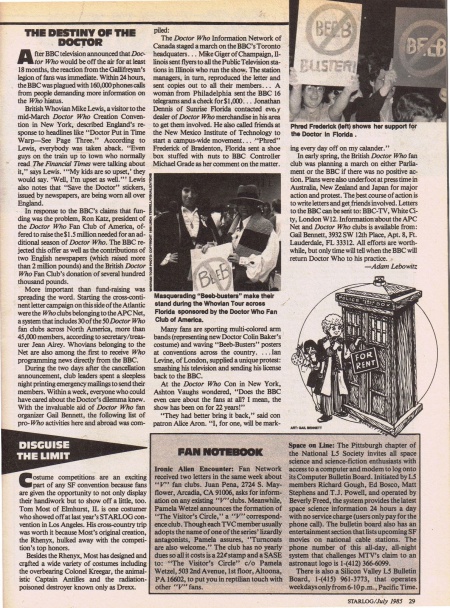 After BBC television announced that Doctor Who would be off the air for at least 18 months, the reaction from the Gallifreyan's legion of fans was immediate Within 24 hours, the BBC was plagued with 160,000 phones calls from people demanding more information on the Who hiatus.

British Whovian Mike Lewis, a visitor to the mid-March Doctor Who Creation Convention in New York, described England's response to headlines like "Doctor Put in Time Warp—See Page Three." According to Lewis, everybody was taken aback. "Even guys on the train up to town who normally read The Financial Times were talking about it," says Lewis. "'My kids are so upset,' they would say. 'Well, I'm upset as well."' Lewis also notes that "Save the Doctor" stickers, issued by newspapers, are being worn all over England.

In response to the BBC's claims that funding was the problem, Ron Katz, president of the Doctor Who Fan Club of America, offered to raise the $1.5 million needed for an additional season of Doctor Who. The BBC rejected this offer as well as the contributions of two English newspapers (which raised more than 2 million pounds) and the British Doctor Who Fan Club's donation of several hundred thousand pounds.

More important than fund-raising was spreading the word. Starting the cross-continent letter campaign on this side of the Atlantic were the Who clubs belonging to the APC Net, a system that includes 30 of the 50 Doctor Who fan clubs across North America, more than 45,000 members, according to secretary/treasurer Jean Airey. Whovians belonging to the Net are also among the first to receive Who programming news directly from the BBC.

During the two days after the cancellation announcement, club leaders spent a sleepless night printing emergency mailings to send their members. Within a week, everyone who could have cared about the Doctor's dilemma knew. With the invaluable aid of Doctor Who fan organizer Gail Bennett, the following list of pro- Who activities here and abroad was compiled.

The Doctor Who Information Network of Canada staged a march on the BBC's Toronto headquarters . . Mike Giger of Champaign, Illinois sent flyers to all the Public Television stations in Illinois who run the show. The station managers, in turn, reproduced the letter and sent copies out to all their members ... A woman from Philadelphia sent the BBC 16 telegrams and a check for $1,000... Jonathan Dennis of Sunrise Florida contacted every dealer of Doctor Who merchandise in his area to get them involved. He also called friends at the New Mexico Institute of Technology to start a campus-wide movement ... "Phred" Frederick of Bradenton, Florida sent a shoe box stuffed with nuts to BBC Controller Michael Grade as her comment on the matter.

Many fans are sporting multi-colored arm bands (representing new Doctor Colin Baker's costume) and waving "Beeb-Busters" posters at conventions across the country... . Ian Levine, of London, supplied a unique protest: smashing his television and sending his license back to the BBC.

At the Doctor Who Con in New York, Ashton Vaughs wondered, "Does the BBC even care about the fans at all? I mean, the show has been on for 22 years!"

"They had better bring it back," said con patron Alice Aron. "I, for one, will be marking every day off on my calander."

In early spring, the British Doctor Who fan club was planning a march on either Parliament or the BBC if there was no positive action. Plans were also underfoot at press time in Australia, New Zealand and Japan for major action and protest. The best course of action is to write letters and get friends involved. Letters to the BBC can be sent to: BBC-TV, White City, London W12. Information about the APC Net and Doctor Who clubs is available from: Gail Bennett, 3932 SW 12th Place, Apt. 8, Ft. Lauderdale, FL 33312. All efforts are worthwhile, but only time will tell when the BBC will return Doctor Who to his practice.

Caption: Phred Frederick (left) shows her support for the Doctor In Florida.

Caption: Masquerading "Beeb-busters" make their stand during the Whovian Tour across Florida sponsored by the Doctor Who Fan Club of America.