The Doctor: In Distress 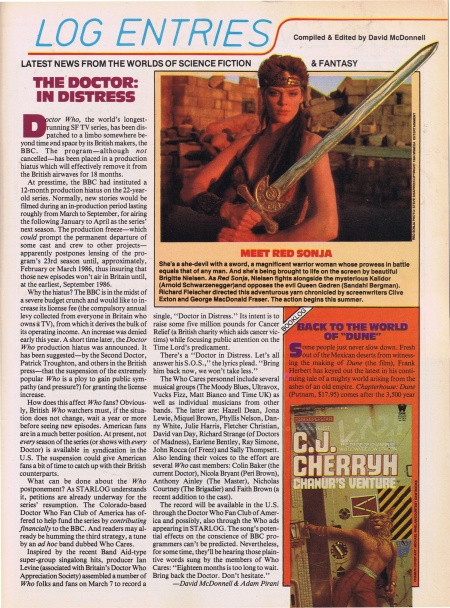 Doctor Who, the world's longest running SF TV series, has been dispatched to a limbo somewhere beyond time and space by its British makers, the BBC. The program—although not cancelled—has been placed in a production hiatus which will effectively remove it from the British airwaves for 18 months.

At presstime, the BBC had instituted a 12-month production hiatus on the 22-year-old series. Normally, new stories would be filmed during an in-production period lasting roughly from March to September, for airing the following January to April as the series' next season. The production freeze—which could prompt the permanent departure of some cast and crew to other projects—apparently postpones lensing of the program's 23rd season until, approximately, February or March 1986, thus insuring that those new episodes won't air in Britain until, at the earliest, September 1986.

Why the hiatus? The BBC is in the midst of a severe budget crunch and would like to increase its license fee (the compulsory annual levy collected from everyone in Britain who owns a TV), from which it derives the bulk of its operating income. An increase was denied early this year. A short time later, the Doctor Who production hiatus was announced. It has been suggested—by the Second Doctor, Patrick Troughton, and others in the British press—that the suspension of the extremely popular Who is a ploy to gain public sympathy (and pressure?) for granting the license increase.

How does this affect Who fans? Obviously, British Who watchers must, if the situation does not change, wait a year or more before seeing new episodes. American fans are in a much better position. At present, not every season of the series (or shows with every Doctor) is available in syndication in the U.S. The suspension could give American fans a bit of time to catch up with their British counterparts.

What can be done about the Who postponement? As STARLOG understands it, petitions are already underway for the series' resumption. The Colorado-based Doctor Who Fan Club of America has offered to help fund the series by contributing financially to the BBC. And readers may already be humming the third strategy, a tune by an ad hoc band dubbed Who Cares.

Inspired by the recent Band Aid-type super-group singalong hits, producer Ian Levine (associated with Britain's Doctor Who Appreciation Society) assembled a number of Who folks and fans on March 7 to record a single, "Doctor in Distress." Its intent is to raise some five million pounds for Cancer Relief (a British charity which aids cancer victims) while focusing public attention on the Time Lord's predicament.

There's a "Doctor in Distress. Let's all answer his S.O.S.," the lyrics plead. "Bring him back now, we won't take less."

The record will be available in the U.S. through the Doctor Who Fan Club of America and possibly, also through the Who ads appearing in STARLOG. The song's potential effects on the conscience of BBC programmers can't be predicted. Nevertheless, for some time, they'll be hearing those plaintive words sung by the members of Who Cares: "Eighteen months is too long to wait. Bring back the Doctor. Don't hesitate."