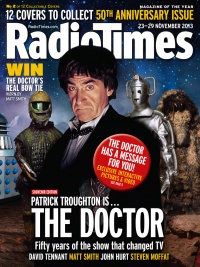 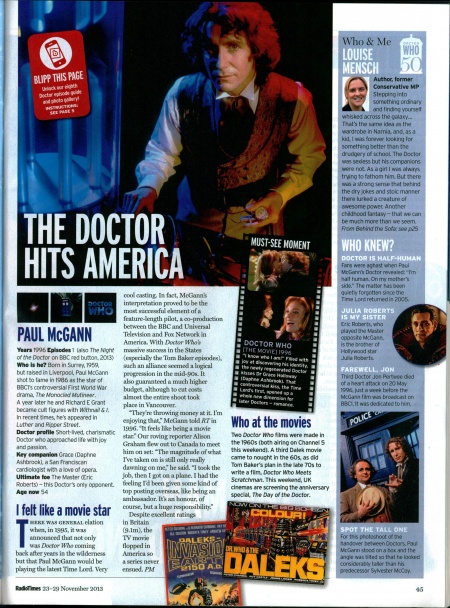 Who is he? Born in Surrey, 1959, but raised in Liverpool, Paul McGann shot to fame in 1986 as the star of BBC1's controversial First World War drama, The Monocled Mutineer. A year later he and Richard E Grant became cult figures with Withnail & I. In recent times, he's appeared in Luther and Ripper Street.

THERE WAS GENERAL elation when, in 1995, it was announced that not only was Doctor Who coming back after years in the wilderness but that Paul McGann would be playing the latest Time Lord. Very cool casting. In fact, McGann's interpretation proved to be the most successful element of a feature-length pilot, a co-production between the BBC and Universal Television and Fox Network in America. With Doctor Who's massive success in the States (especially the Tom Baker episodes), such an alliance seemed a logical progression in the mid-90s. It also guaranteed a much higher budget, although to cut costs almost the entire shoot took place in Vancouver.

"They're throwing money at it. I'm enjoying that," McGann told RT in 1996. "It feels like being a movie star." Our roving reporter Alison Graham flew out to Canada to meet him on set: "The magnitude of what I've taken on is still only really dawning on me," he said. "I took the job, then I got on a plane. I had the feeling I'd been given some kind of top posting overseas, like being an ambassador. It's an honour, of course, but a huge responsibility."

Despite excellent ratings in Britain (9.1m), the TV movie flopped in America so a series never ensued.

"I know who I am!" Filled with joy at discovering his identity, the newly regenerated Doctor kisses Dr Grace Holloway (Daphne Ashbrook). Thatcontroversial kiss, the Time Lord's first, opened up a whole new dimension for later Doctors - romance.

Who at the movies

Two Doctor Who films were made in the 1960s (both airing on Channel 5 this weekend). A third Dalek movie came to nought in the 60s, as did Tom Baker's plan in the late 70s to write a film, Doctor Who Meets Scratchman. This weekend, UK cinemas are screening the anniversary special, The Day of the Doctor.

Stepping into something ordinary and finding yourself whisked across the galaxy... That's the same idea as the wardrobe in Narnia, and, as a kid, I was forever looking for something better than the drudgery of school. The Doctor was sexless but his companions were not. As a girl I was always trying to fathom him. But there was a strong sense that behind the dry jokes and stoic manner there lurked a creature of awesome power. Another childhood fantasy — that we can be much more than we seem. From Behind the sofa: see p25

DOCTOR IS HALF HUMAN

Fans were aghast when Paul McGann's Doctor revealed: "I'm half human. On my mother's side." The matter has been quietly forgotten since the Time Lord returned in 2005.

JULIA ROBERTS IS MY SISTER

Eric Roberts, who played the Master opposite McGann, is the brother of Hollywood star Julia Roberts.

Third Doctor Jon Pertwee died of a heart attack on 20 May 1996, just a week before the McGann film was broadcast on BBC1. It was dedicated to him

SPOT THE TALL ONE

For this photoshoot of the handover between Doctors, Paul McGann stood on a box and the angle was tilted so that he looked considerably taller than his predecessor Sylvester McCoy.