The Doctor from a monastery 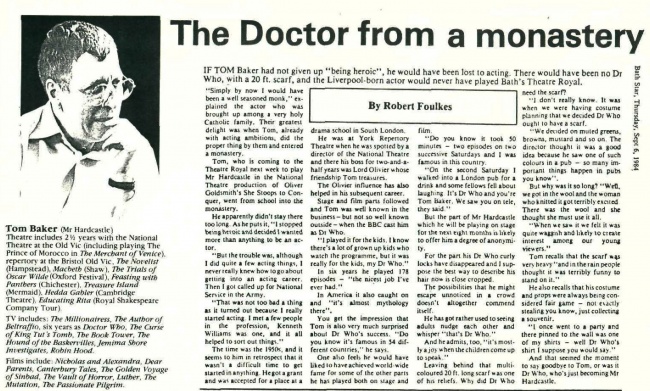 IF TOM Baker had not given up "being heroic", he would have been lost to acting. There would have been no Dr Who, with a 20 ft, scarf, and the Liverpool-born actor would never have played Bath's Theatre Royal.

Tom, who is coming to the Theatre Royal next week to play Mr Hardcastle in the National Theatre production of Oliver Goldsmith's She Stoops to Conquer, went from school into the monastery:

He apparently didn't stay there too long. As he puts it, "I stopped being heroic and decided I wanted more than anything to be an actor.

"But the trouble was, although I did quite a few acting things, I never really knew how to go about getting into an acting career. Then I got called up for National Service in the Army.

"That was not too bad a thing as it turned out because I really started acting I met a few people in the profession, Kenneth Williams was one, and it all helped to sort out things."

The time was the 1950s, and it seems to him in retrospect that it wasn't difficult time to get started in anything. He got a grant and was accepted for a place at a drama school in South London, He was at York Repertory Theatre when he was spotted by a director of the National Theatre and there his boss for two-and-a-half years was Lord Olivier whose friendship Tom treasures.

The Olivier influence has oho helped in his subsequent career. Stage and film pans followed and Tom was well known in the business—but not so well known outside — when the BBC cast him as Dr Who.

"I played it for the kids. I know there's a lot of grown up kids who watch the programme, but it was really for the kids, my Dr Who." In six years he played 178 episodes — "the nicest job I've ever had,"

In America it also caught on and "it's almost mythology there".

You get the impression that Tom is also very much surprised about Dr Who's success. "Do you know it's famous in 54 different countries," he says.

One also feels he would have liked to have achieved world-wide fame for some of the other parts he has played both on stage and film.

"Do you know it took 50 minutes — two episodes on two successive Saturdays and I was famous in this country.

"On the second Saturday I walked. into a London pub for a drink and some fellows fell about laughing It's Dr Who and you're Tom Baker, We saw you on tele, they said."

But the part of Mr Hardcastle which he will be playing on stage lot the next eight months is likely to offer him a degree of anonymity.

For the part his Dr Who curly locks have disappeared and I suppose the best way to describe his hair now as close cropped.

The possibilities that he might escape unnoticed in a crowd doesn't altogether commend itself.

He has got rather used to seeing adults nudge each other and whisper "that's Dr Who."

And he admits, too, "it's mostly a joy when the children come up to speak."

Leaving behind that multi-coloured 20 ft. long scarf was one of his reliefs, Why did Di Who need the scarf?

"I don't really know. It was when we were having costume planning that we decided Dr Who ought to have a scarf.

"We decided on muted greens, browns, mustard and so on. The director thought it was a good idea because he saw one of such colours in a pub — so many important things happen in pubs you know",

But why was It so long? "Well, we got in the wool and the woman who knitted it got terribly excited There was the wool and the thought she must use it all, "When we saw it we felt it was quite waggish and likely to create interest among our young viewers."

Tom recalls that the scarf was very heavy "and in the rain people thought it was terribly funny to stand on it."

He also recalls that his costume and props were always being considered fair game — not exactly stealing you know, just collecting a souvenir,

"I once went to a party and there pinned to the wall was one of my shirts — well Dr Who's shirt I suppose you would say." And that seemed the moment to say goodbye in Tom, or was it Dr Who, who's just becoming Mr Hardcastle.

TV includes; The Millionairess, The Author of Beltraffro, six years as Doctor Who, The Curse of King Tut 's Tomb. The Rook Tower, The Hound of the Baskerrilles, Jemima Shore Investigates, Robin Hood.

Films include: Nicholas and Alexandra, Dear Parents, Canterbury Tales, The Golden Voyage of Sinbad, The Vault of Horror, Luther, The Mutation, The Passionate Pilgrim. "Simply by now I would have been a well seasoned monk," explained the actor who was brought up among a very holy Catholic family. Their greatest delight was when Tom. already with acting ambitions, did the proper thing by them and entered a monastery.