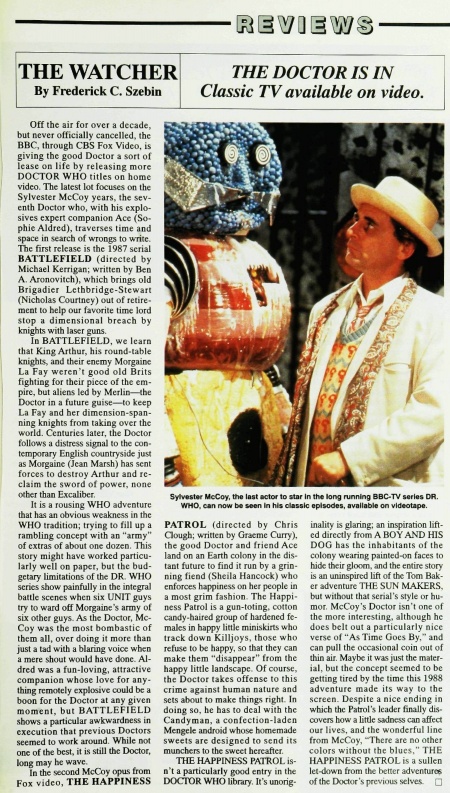 Sylvester McCoy, the last actor to star in the long running BBC-TV series DR. WHO, can now be seen in his classic episodes, available on videotape.

Off the air for over a decade, but never officially cancelled, the BBC, through CBS Fox Video, is giving the good Doctor a sort of lease on life by releasing more DOCTOR WHO titles on home video. The latest lot focuses on the Sylvester McCoy years, the seventh Doctor who, with his explosives expert companion Ace (Sophie Aldred), traverses time and space in search of wrongs to write. The first release is the 1987 serial BATTLEFIELD (directed by Michael Kerrigan; written by Ben A. Aronovitch), which brings old Brigadier Lethbridge-Stewart (Nicholas Courtney) out of retirement to help our favorite time lord stop a dimensional breach by knights with laser guns.

In BATTLEFIELD, we learn that King Arthur, his round-table knights, and their enemy Morgaine La Fay weren't good old Brits fighting for their piece of the empire, but aliens led by Merlin—the Doctor in a future guise—to keep La Fay and her dimension-spanning knights from taking over the world. Centuries later, the Doctor follows a distress signal to the contemporary English countryside just as Morgaine (Jean Marsh) has sent forces to destroy Arthur and reclaim the sword of power, none other than Excaliber.

It is a rousing WHO adventure that has an obvious weakness in the WHO tradition; trying to fill up a rambling concept with an "army" of extras of about one dozen. This story might have worked particularly well on paper, but the budgetary limitations of the DR. WHO series show painfully in the integral battle scenes when six UNIT guys try to ward off Morgaine's army of six other guys. As the Doctor, McCoy was the most bombastic of them all, over doing it more than just a tad with a blaring voice when a mere shout would have done. Aldred was a fun-loving, attractive companion whose love for anything remotely explosive could be a boon for the Doctor at any given moment, but BATTLEFIELD shows a particular awkwardness in execution that previous Doctors seemed to work around. While not one of the best, it is still the Doctor, long may he wave.

In the second McCoy opus from Fox video, THE HAPPINESS PATROL (directed by Chris Clough; written by Graeme Curry), the good Doctor and friend Ace land on an Earth colony in the distant future to find it run by a grinning fiend (Sheila Hancock) who enforces happiness on her people in a most grim fashion. The Happiness Patrol is a gun-toting, cotton candy-haired group of hardened females in happy little miniskirts who track down Killjoys, those who refuse to be happy, so that they can make them "disappear" from the happy little landscape. Of course, the Doctor takes offense to this crime against human nature and sets about to make things right. In doing so, he has to deal with the Candyman, a confection-laden Mengele android whose homemade sweets are designed to send its munchers to the sweet hereafter.

THE HAPPINESS PATROL isn't a particularly good entry in the DOCTOR WHO library. It's unoriginality is glaring; an inspiration lifted directly from A BOY AND HIS DOG has the inhabitants of the colony wearing painted-on faces to hide their gloom, and the entire story is an uninspired lift of the Tom Baker adventure THE SUN MAKERS, but without that serial's style or humor. McCoy's Doctor isn't one of the more interesting, although he does belt out a particularly nice verse of "As Time Gocs By," and can pull the occasional coin out of thin air. Maybe it was just the material, but the concept seemed to be getting tired by the time this 1988 adventure made its way to the screen. Despite a nice ending in which the Patrol's leader finally discovers how a little sadness can affect our lives, and the wonderful line from McCoy, "There are no other colors without the blues," THE HAPPINESS PATROL is a sullen let-down from the better adventures of the Doctor's previous selves.