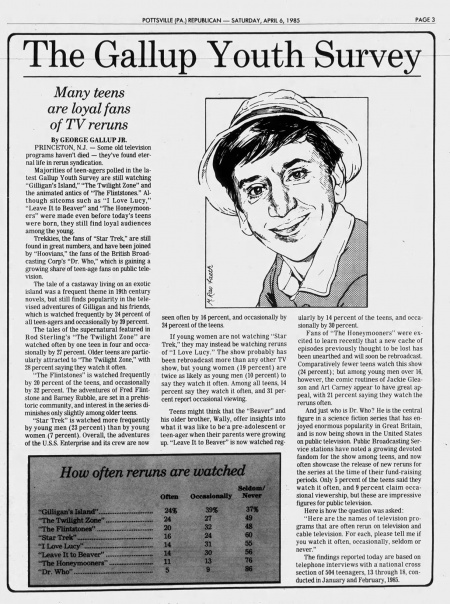 Majorities of teen-agers polled in the latest Gallup Youth Survey are still watching "Gilligan's Island," "The Twilight Zone" and the animated antics of "The Flintstones." Although sitcoms such as "I Love Lucy," "Leave It to Beaver" and "The Honeymooners" were made even before today's teens were born, they still find loyal audiences among the young.

Trekkies, the fans of "Star Trek," are still found in great numbers, and have been joined by "Hoovians," the fans of the British Broadcasting Corp's "Dr. Who," which is gaining a growing share of teen-age fans on public television.

The tale of a castaway living on an exotic island was a frequent theme in 19th century novels, but still finds popularity in the televised adventures of Gilligan and his friends, which is watched frequently by 24 percent of all teen-agers and occasionally by 39 percent.

The tales of the supernatural featured in Rod Sterling's "The Twilight Zone" are watched often by one teen in four and occasionally by 27 percent. Older teens are particularly attracted to "The Twilight Zone," with 28 percent saying they watch it often.

"The Flintstones" is watched frequently by 20 percent of the teens, and occasionally by 32 percent. The adventures of Fred Flint-stone and Barney Rubble, are set in a prehistoric community, and interest in the series diminishes only slightly among older teens.

"Star Trek" is watched more frequently by young men (23 percent) than by young women. (7 percent). Overall, the adventures of the U.S.S. Enterprise and its crew are now seen often by 16 percent, and occasionally by 24 percent of the teens.

Teens might think that the "Beaver" and his older brother, Wally, offer insights into what it was like to be a pre-adolescent or teen-ager when their parents were growing up. "Leave It to Beaver" is now watched regularly by 14 percent of the teens, and occasionally by 30 percent.

Fans of "The Honeymooners" were excited to learn recently that a new cache of episodes previously thought to be lost has been unearthed and will soon be rebroadcast. Comparatively fewer teens watch this show (24 percent); but among young men over 16, however, the comic routines of Jackie Gleason and Art Carney appear to have great appeal, with 21 percent saying they watch the reruns often.

And just who is Dr. Who? He is the central figure in a science fiction series that has enjoyed enormous popularity in Great Britain, and is now being shown in the United States on public television. Public Broadcasting Service stations have noted a growing devoted fandom for the show among teens, and now often showcase the release of new reruns for the series at the time of their fund-raising periods. Only 5 percent of the teens said they watch it often, and 9 percent claim occasional viewership, but these are impressive figures for public television.

Here is how the question was asked:

"Here are the names of television programs that are often rerun on television and cable television. For each, please tell me if you watch it often, occasionally, seldom or never."

The findings reported today are based on telephone interviews with a national cross section of 504 teenagers, 13 through 18, conducted in January and February, 1985.

"Leave It to Beaver"