The Man Who's Who 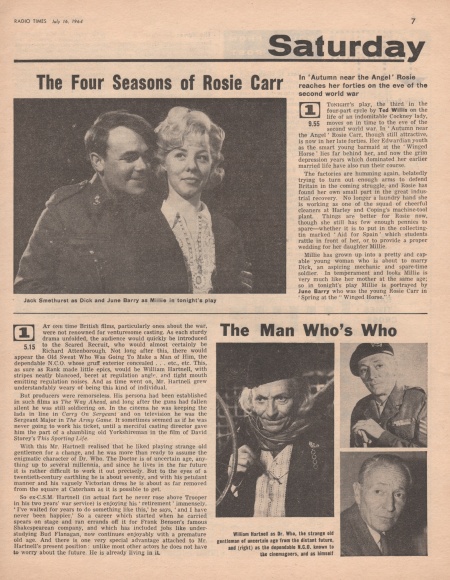 AT ONE time British films, particularly ones about the war, were not renowned for venturesome casting. As each sturdy drama unfolded, the audience would quickly be introduced to the Scared Recruit, who would almost certainly be Richard Attenborough. Not long after this, there would appear the Old Sweat Who Was Going To Make a Man of Him, the dependable N.C.O. whose gruff exterior concealed ... etc., etc. This, as sure as Rank made little epics, would be William Hartnell, with stripes neatly blancoed, beret at regulation angle, and tight mouth emitting regulation noises. And as time went on, Mr. Hartnell grew understandably weary of being this kind of individual.

But producers were remorseless. His persona had been established in such films as The Way Ahead, and long after the guns had fallen silent he was still soldiering on. In the cinema he was keeping the lads in line in Carry On Sergeant and on television he was the Sergeant Major in The Army Game. It sometimes seemed as if he was never going to work his ticket, until a merciful casting director gave him the part of a shambling old Yorkshireman in the film of David Storey's This Sporting Life.

With this Mr. Hartnell realised that he liked playing strange old gentlemen for a change, and he was more than ready to assume the enigmatic character of Dr. Who. The Doctor is of uncertain age, anything up to several millennia, and since he lives in the far future it is rather difficult to work it out precisely. But to the eyes of a twentieth-century earthling he is about seventy, and with his petulant manner and his vaguely Victorian dress he is about as far removed from the square at Caterham as it is possible to get.

So ex-C.S.M. Hartnell (in actual fact he never rose above Trooper in his two years' war service) is enjoying his 'retirement' immensely. 'I've waited for years to do something like this,' he says, and I have never been happier.' So a career which started when he carried spears on stage and ran errands off it for Frank Benson's famous Shakespearean company, and which has included jobs like understudying Bud Flanagan, now continues enjoyably with a premature old age. And there is one very special advantage attached to Mr. Hartnell's present position : unlike most other actors he does not have to worry about the future. He is already living in it.

Caption: William Hartnell as Dr. Who, the strange old gentleman of uncertain age from the distant future, and (right) as the dependable N.C.O. known to the cinemagoers, and as himself