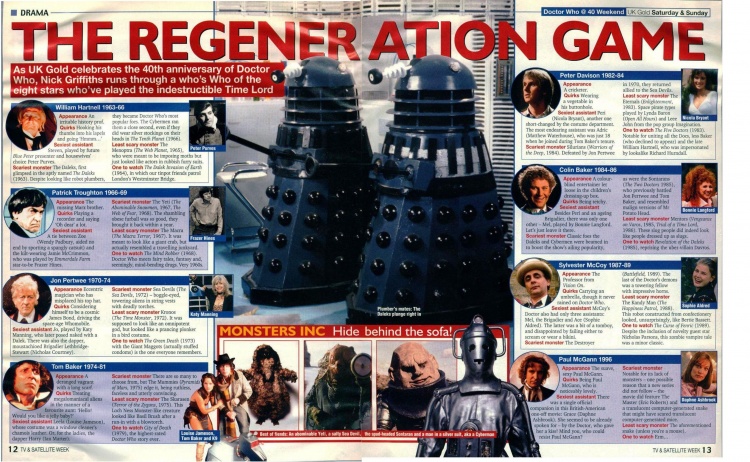 As UK Gold celebrates the 40th anniversary of Doctor Who, Nick Griffiths runs through a who's Who of the eight stars who've played the indestructible Time Lord

Quirks Hooking his thumbs into his lapels and going Hmmm...'

Scariest monster The Daleks, first glimpsed in the aptly named The Daleks (1963). Despite looking like robot plumbers, they became Doctor Who's most popular foes. The Cybermen ran them a close second, even if they did wear silver stockings on their heads in The Tenth Planet (1966).

Least scary monster The Menoptra (The Web Planet, 1965), who were meant to be imposing moths but just looked like actors in rubbish furry suits.

One to watch The Dalek Invasion of Earth (1964), in which our tinpot friends patrol London's Westminster Bridge.

Quirks Playing a recorder and saying 'Oh dear a lot.

Sexiest assistant A tie between Zoe (Wendy Padbury, aided no end by sporting a spangly catsuit) and the kilt-wearing Jamie McCrimmon, who was played by Emtnerdale Farm star-to-be Frazer Hines.

Scariest monster The Yeti (The Abominable Snowmen, 1967, The Web of Fear, 1968). The shambling obese furball was so good, they brought it back within a year.

Least scary monster The Macra (The Macra Terror, 1967). It was meant to look like a giant crab, but actually resembled a travelling junkyard.

Appearance Eccentric magician who has misplaced his top hat.

Quirks Considering himself to be a cosmic James Bond, driving the space-age Whomobile.

Least scary monster Kronos (The Time Monster, 1972). It was supposed to look like an omnipotent god, but looked like a prancing plonker in a bird costume.

One to watch The Green Death (1973) with the Giant Maggots (actually stuffed condoms) is the one everyone remembers.

Appearance A deranged vagrant with a long scarf.

Quirks Treating megalomaniacal aliens in the manner of a favourite aunt: 'Hello! Would you like a jelly baby?'

Sexiest assistant Leela (Louise Jameson), whose costume was a window cleaner's chamois leather. Or, for the ladies, the dapper Harry (Ian Marter).

Scariest monster There are so many to choose from, but The Mummies (Pyramids of Mars, 1975) edge it, being ruthless, faceless and utterly convincing.

Least scary monster The Skarasen (Terror of the Zygons, 1975). This Loch Ness Monster-like creature looked like Basil Brush after a run-in with a blowtorch.

One to watch City of Death (1979), the highest-rated Doctor Who story ever.

Quirks Wearing a vegetable in his buttonhole.

Sexiest assistant Peri (Nicola Bryant), another one short-changed by the costume department. The most endearing assistant was Adric (Matthew Waterhouse), who was just 18 when he joined during Tom Baker's tenure.

Scariest monster Silurians (Warriors of the Deep, 1984). Defeated by Jon Pertwee in 1970, they returned allied to the Sea Devils.

One to watch The Five Doctors (1983). Notable for uniting all the Docs, less Baker (who declined to appear) and the late William Hartnell, who was impersonated by lookalike Richard Hurndall.

Sexiest assistant Besides Peri and an ageing Brigadier, there was only one other - Mel, played by Bonnie Langford. Let's just leave it there.

Scariest monster Classic foes the Daleks and Cybermen were beamed in to boost the show's ailing popularity,

as were the Sontarans (The Two Doctors 1985), who previously battled Jon Pertwee and Tom Baker, and resembled malign versions of Mr Potato Head.

Least scary monster Mentors (Vengeance on Varos, 1985, Trial of a Time Lord, 1986). These slug people did indeed look like people dressed up as slugs.

One to watch Revelation of the Daleks (1985), reprising the uber-villain Davros.

Appearance The Professor from Vision On.

Quirks Carrying an umbrella, though it never rained on Doctor Who.

Sexiest assistant McCoy's Doctor also had only three assistants: Mel, the Brigadier and Ace (Sophie Aldred). The latter was a bit of a tomboy, and disappointed by failing either to scream or wear a bikini.

Scariest monster The Destroyer (Battlefield, 1989). The last of the Doctor's demons was a towering fellow with impressive horns.

One to watch The Curse of Fenric (1989). Despite the inclusion of novelty guest star Nicholas Parsons, this zombie vampire tale was a minor classic.

Quirks Being Paul McGann, who is noticeably lovely.

Sexiest assistant There was a single official companion in this British-American one-off movie: Grace (Daphne Ashbrook). She seemed to be already spoken for - by the Doctor, who gave her a kiss! Mind you, who could resist Paul McGann?

Least scary monster The aforementioned snake (unless you're a mouse).

Best of fiends: An abominable Yeti, a salty Sea Devil, the spud-headed Sontaran and a man in a silver suit, aka a Cyberman