The Return of Dr. Who 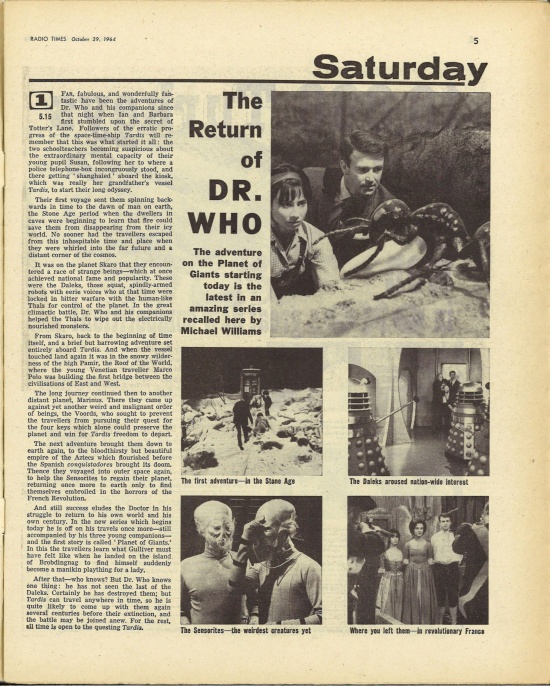 The Return of DR. WHO

FAR, fabulous, and wonderfully fantastic have been the adventures of Dr. Who and his companions since that night when Ian and Barbara first stumbled upon the secret of Totter's Lane. Followers of the erratic progress of the space-time-ship Tardis will remember that this was what started it all : the two schoolteachers becoming suspicious about the extraordinary mental capacity of their young pupil Susan, following her to where a police telephone-box incongruously stood, and there getting 'shanghaied' aboard the kiosk, which was really her grandfather's vessel Tardis, to start their long odyssey.

Their first voyage sent them spinning backwards in time to the dawn of man on earth, the Stone Age period when the dwellers in caves were beginning to learn that fire could save them from disappearing from their icy world. No sooner had the travellers escaped from this inhospitable time and place when they were whirled into the far future and a distant corner of the cosmos.

It was on the planet Skaro that they encountered a race of strange beings—which at once achieved national fame and popularity. These were the Daleks, those squat, spindly-armed robots with eerie voices who at that time were locked in bitter warfare with the human-like Thals for control of the planet. In the great climactic battle, Dr. Who and his companions helped the Thals to wipe out the electrically nourished monsters.

From Skaro, back to the beginning of time itself, and a brief but harrowing adventure set entirely aboard Tardis. And when the vessel touched land again it was in the snowy wilderness of the high Pamir, the Roof of the World, where the young Venetian traveller Marco Polo was building the first bridge between the civilisations of East and West.

The long journey continued then to another distant planet, Marinus. There they came up against yet another weird and malignant order of beings, the Voords, who sought to prevent the travellers from pursuing their quest for the four keys which alone could preserve the planet and win for Tardis freedom to depart.

The next adventure brought them down to earth again, to the bloodthirsty but beautiful empire of the Aztecs which flourished before the Spanish conquistadores brought its doom. Thence they voyaged into outer space again, to help the Sensorites to regain their planet, returning once more to earth only to find themselves embroiled in the horrors of the French Revolution.

And still success eludes the Doctor in his struggle to return to his own world and his own century. In the new series which begins today he is off on his travels once more—still accompanied by his three young companions—and the first story is called 'Planet of Giants.' In this the travellers learn what Gulliver must have felt like when he landed on the island of Brobdingnag to find himself suddenly become a manikin plaything for a lady.

After that—who knows? But Dr. Who knows one thing: he has not seen the last of the Daleks. Certainly he has destroyed them; but Tardis can travel anywhere in time, so he is quite likely to come up with them again several centuries before their extinction, and the battle may be joined anew. For the rest, all time is open to the questing Tardis.

The Sensorites—the weirdest creatures yet

Where you left them--in revolutionary France