The Tardis is winging its way back, but who'll be at the controls? 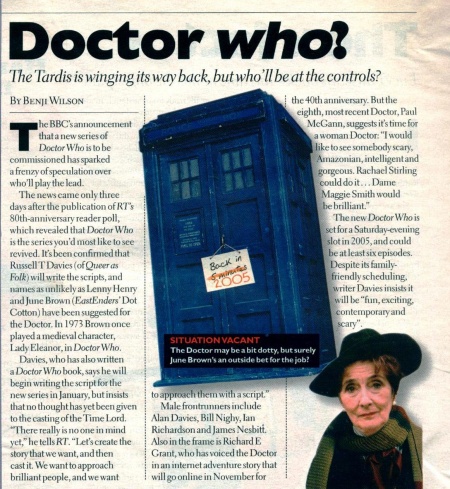 The BBC's announcement that a new series of Doctor Who is to be commissioned has sparked a frenzy of speculation over who'll play the lead.

The news came only three days after the publication of RT's 80th-anniversary reader poll, which revealed that Doctor Who is the series you'd most like to see revived. It's been confirmed that Russell T Davies (of Queer as Folk) will write the scripts, and names as unlikely as Lenny Henry and June Brown (EastEnders' Dot Cotton) have been suggested for the Doctor. In 1973 Brown once played a medieval character, Lady Eleanor, in Doctor Who.

Davies, who has also written a Doctor Who book, says he will begin writing the script for the new series in January, but insists that no thought has yet been given to the casting of the Time Lord. "There really is no one in mind yet," he tells RT. "Let's create the story that we want, and then cast it. We want to approach brilliant people, and we want to approache them with a script."

Male frontrunners include Alan Davies, Bill Nighy, Ian Richardson and James Nesbitt. Also in the frame is Richard E Grant, who has voiced the Doctor in an internet adventure story that will go online in November for the 40th anniversary. But the eighth, most recent Doctor, Paul McGann, suggests it's time for a woman Doctor: "I would like to see somebody scary, Amazonian, intelligent and gorgeous. Rachael Stirling could do it ... Dame Maggie Smith would be brilliant"

The new Doctor Who is set for a Saturday-evening lot in 2005, and could be at least six episodes. Despite its family-friendly scheduling, writer Davies insists it will be "fun, exciting, contemporary and scary

Caption: SITUATION VACANT The Doctor may be a bit dotty, but surely June Brown's an outside bet for the job?