The Who's who of girls 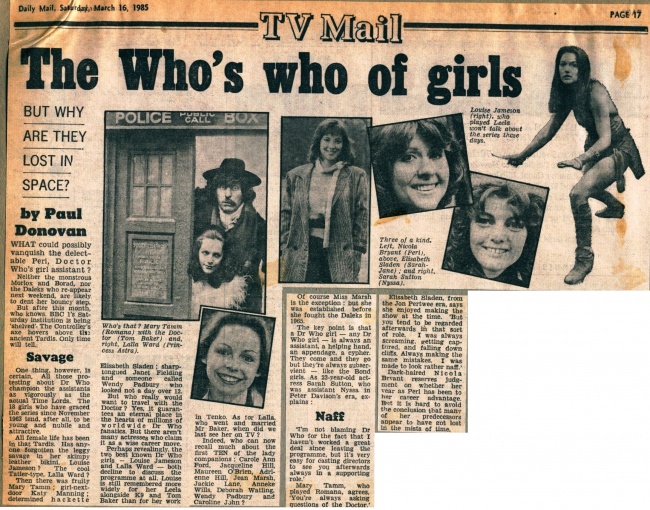 BUT WHY ARE THEY LOST IN SPACE?

WHAT could possibly vanquish the delectable Peri, Doctor Who's girl assistant ?

Neither the monstrous Morlox and Borad, nor the Daleks who re-appear next weekend, are likely to dent her bouncy step.

But after this month, who knows. BBC 1's Saturday institution is being 'shelved'. The Controller's axe hovers above the ancient Tardis. Only time will tell.

One thing. however, is certain, All those protesting about Dr Who champion the assistants as vigorously as the actual Time Lords. The 18 girls who have graced the series since November 1963 tend, after all, to be young and nubile and attractive.

All female life has been in that Tardis. Has anyone forgotten the leggy savage in her skimpy leather bikini, Louise Jameson ? The cool Tatler-type, Lalla Ward ?

Then there was fruity Mary Tamm ; girl-next-door Katy Manning ; determined hackette Elisabeth Sladen ; sharp-tongued Janet Fielding and someone called Wendy Padbury who looked not a day over 12.

But who really would want to travel with the Doctor ? Yes, it guarantees an eternal place in the hearts of millions of worldwide Dr Who fanatics. But there aren't many actresses who claim it as a wise career move.

Perhaps revealingly, the two best known Dr Who girls — Louise Jameson and Lalla Ward — both decline to discuss the programme at all. Louise is still remembered more widely for her Leela alongside K9 and Tom Baker than for her work in Tenko. As for Lalla, who went and married Mr Baker, when did we last see her on TV ?

Of course Miss Marsh is the exception : but she was established before she fought the Daleks in 1965.

The key point is that a Dr Who girl — any Dr Who girl — is always an assistant, a helping hand, an appendage, a cypher. They come and they go but they're always subservient — like the Bond girls. As 23-year-old actress Sarah Sutton, who was assistant Nyssa in Peter Davison's era, explains :

'I'm not blaming Dr Who for the fact that I haven't worked a great deal since leaving the programme, but it's very easy for casting directors to see you afterwards always in a supporting role.'

Mary Tamm, who played Romana, agrees. 'You're always asking questions of the Doctor.' Elisabeth Sladen, from the Jon Pertwee era, says she enjoyed making the show at the time. 'But you tend to be regarded afterwards in that sort of role. I was always screaming, getting captured, and falling down cliffs. Always making the same mistakes. I was made to look rather naff.'

Dark-haired Nicola Bryant reserves judgment on whether her year as Peri has been to her career advantage. But it is hard to avoid the conclusion that many of her predecessors appear to have got lost in the mists of time.

Louise Jameson (right), who played Leela won't talk about the series these days.

Who's that ? Mary Tamm (Romana) with the Doctor (Tom Baker) and, right. Lalla Ward (Princess Astra).