The afternoon Tom Baker sat down quietly to watch Dr Who 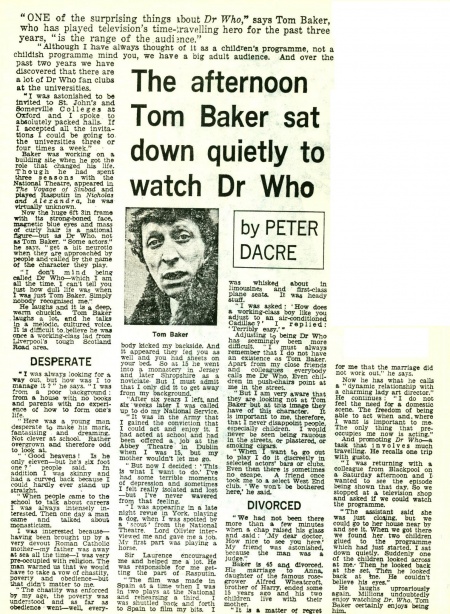 "ONE of the surprising things shout Dr Who," says Tom Baker, who has played television's time-travelling hero for the past three years, " is the range of the audience."

"Although I have always thought of it as a children's programme, not a childish programme mind you, we have a big adult audience. And over the past two years we have discovered that there are a lot of Dr Who fan clubs at the universities.

"I was astonished to be invited to St. John's and Somerville Colleges at Oxford and I spoke to absolutely packed halls. If I accepted all the invitations I could be going to. the universities three or four times a week."

Baker was working on a building site when he got the role that changed his life. Though he had spent three seasons with the National Theatre, appeared in The Voyage of Sinbad and played Rasputin in Nicholas and Alexandra, he was virtually unknown.

Now the huge 6ft 3in frame with its strong-boned face, magnetic blue eyes and mass of curly hair is a national figure—but as Dr Who, not as Tom Baker. "Some actors," he says, "get a bit neurotic when they are approached by people and called by the name of the character they play.

"I don't mind being called Dr Who—which I am all the time. I can't tell you lust how dull life was when was just Tom Baker. Simply nobody recognised me."

He laughs and it is a deep, warm chuckle. Tom Baker laughs a lot, and he talks in a melodic, cultured voice. It is difficult to, believe he was once a working-class lad from Liverpool's tough Scotland Road area.

I was always looking for a way out, but how was I to manage it?" he says. "I was from a poor background : from a house with no books and parents with no experience of how to form one's life.

"Here was a young man desperate to make his mark, fantasising and dreaming. Not clever at school. Rather overgrown and therefore odd to look at.

"' Good heavens! Is he only eleven—but he's six foot one ?' people said. In addition I was skinny and had a curved back because I could hardly ever stand up straight.

" When people came to the school to talk about careers I was always intensely interested. Then one day a man came and talked about monasticism.

I was interested because—having been brought up by a very devout Roman Catholic mother—my father was away at sea all the time—I was very pre-occupied with religion. The man warned us that we would have to take a vow of chastity, poverty and obedience—but that didn't matter to me.

"The chastity was enforced by my age, the poverty was understood and as far as obedience went—well, everybody kicked my backside. And it appeared they fed you as well and you had sheets on your bed. So at 15 he went into a monastery in Jersey' and later Shropshire as a noviciate- But I must admit that I only did it to get away from my background.

"After six years I left, and six weeks later I was called up to do my National Service.

"It was in the Army that I gained the conviction that I could act and enjoy it. I had acted at school and had been offered a, job at the Abbey Theatre in Dublin when I was 15, but my mother wouldn't let me go.

"But now I decided : This is what I want to do.' I've had some terrible moments of depression and sometimes I felt really isolated and lost —but I've never wavered from that feeling.

"I was appearing in a late night revue in York, playing a dog, when I was spotted by a 'scout' from the National Theatre. Lord Olivier interviewed me and gave me a job. My first part was playing a horse.

Sir Laurence encouraged me and helped me a lot. He was responsible for me getting the part of Rasputin.

"The film was made in Spain at a time when I was in two plays at the National and rehearsing a third. I was shuttled back and forth to Spain to film my bits. I was whisked about in limousines and first-class plane seats. It was heady stuff.

"I was asked : 'How does a working-class boy like you adjust to an air-conditioned Cadillac?' I replied: 'Terribly easy.'"

Adjusting to being Dr Who has seemingly been more difficult. "I must always remember that I do not have an existence as Tom Baker. Apart from my close friends and colleagues everybody calls me Dr Who. Even children in push-chairs point at me in the street.

"But I am very aware that they are looking not at Tom Baker but at this image they have of this character. It is important to me. therefore, that I never disappoint people, especially children. I would never be seen being raucous in the streets, or plastered, or smoking cigars.

"When I want to go out to play I do it discreetly in selected actors' bars or clubs. Even then there is sometimes no escape. A friend once took me to a select West End club. 'We won't be bothered here,' he said.

"We had not been there more than a few minutes when a chap raised his glass and said : 'My dear doctor. How nice to see you here.' My friend was astonished, because the man was a judge."

Baker Ii 45 and divorced. His marriage to Anna, daughter of the famous rose-grower Alfred Wheatcroft, brother of Harry, ended some 15 years ago and his two children live with their mother.

"It is a matter of regret for me that the marriage did not work out," he says.

Now he has what he calls a "dynamic relationship with a charming lady art director." He continues : "I do not feel the need for a domestic scene. The freedom of being able to act when and. where I want is important to me. The only thing that preoccupies me now is acting."

And promoting Dr Who—a task that involves much travelling. He recalls one trip with gusto.

"I was returning with a colleague from Blackpool on a Saturday afternoon and I. wanted to see the episode being shown that day. So we stopped at a television shop and asked if we could watch the programme.