The cult of Frisbie 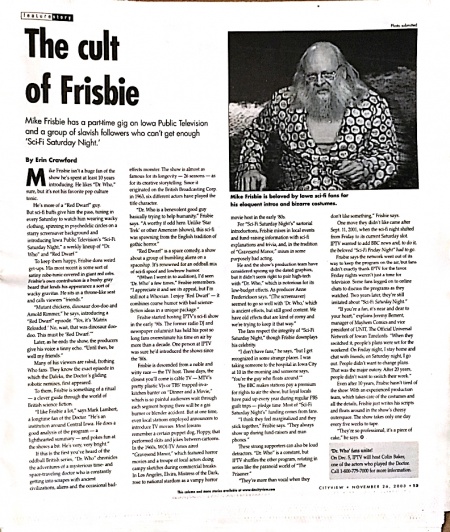 Mike Frisbie has a part-time gig on Iowa Public Television and a group of slavish followers who can't get enough 'Sci-Fi Saturday Night.'

Mike Frisbie isn't a huge fan of the show he's spent at least 10 years introducing. He likes "Dr. Who," sure, but it's not his favorite pop culture tonic.

He's more of a "Red Dwarf' guy. But sci-fi buffs give him the pass, tuning in every Saturday to watch him wearing wacky clothing, spinning in psychedelic circles on a starry screensaver background and introducing Iowa Public Television's "Sci-Fi Saturday Night," a weekly lineup of "Dr. Who" and "Red Dwarf."

To keep them happy, Frisbie dons weird get-ups. His most recent is some sort of satiny robe-tunic covered in giant red orbs. Frisbie's own contribution is a bushy gray beard that lends his appearance a sort of wacky gravitas. He sits in a throne-like seat and calls viewers "friends."

"Mutant chickens, dinosaur doo-doo and Arnold Rimmer," he says, introducing a "Red Dwarf" episode. "Yes, it's 'Matrix Reloaded.' No, wait, that was dinosaur doo-doo. This must be 'Red Dwarf.'"

Later, as he ends the show, the producers give his voice a tinny echo. "Until then, be well my friends."

Many of his viewers are rabid, frothing Who fans. They know the exact episode in which the Daleks, the Doctor's gliding robotic nemises, first appeared.

To them, Frisbie is something of a ritual — a clever guide through the world of British science fiction.

"I like Frisbie a lot,' says Mark Lambert, a longtime fan of the Doctor. 'He's an institution around Central Iowa. He does a good analysis of the program — a lighthearted summary — and pokes fun at the shows a bit. He's very, very bright.'

If this is the first you've heard of the oddball British series, "Dr. Who' chronicles the adventure, of a mysterious time and space-traveling doctor who is constantly getting into scrapes with ancient civilizations, aliens and the occasional bad-effects monster. The show is almost as famous for its longevity — 26 seasons — as for its creative storytelling Since it originated on the British Broadcasting Corp. in 1963, six different actors have played the title character.

"Dr. Who is a benevolent good guy basically trying to help humanity," Frisbie says. "A worthy if odd hero. Unlike 'Star Trek' or other American (shows), this sci-fi was spawning from the English tradition of gothic horror."

"Red Dwarf" is a space comedy, a show about a group of bumbling aliens on a spaceship. It's renowned for an oddball mix of sci-6 spoof and lowbrow humor.

"(When I went in to audition), I'd seen 'Dr. Who' a few times," Frisbie remembers. "I appreciate it and see its appeal, but I'm still not a Whovian. I enjoy 'Red Dwarf' — it combines coarse humor with bad science-fiction ideas in a unique package."

Frisbie started hosting IPTV's sci-fi show in the early '90s. The former radio DJ and newspaper columnist has held his post so long fans overestimate his time on air by more than a decade. One person at IPTV was sure he'd introduced the shows since the '80s.

Frisbie is descended from a noble and witty race — the TV host. These days, the closest you'll come is cable TV — MTV's pretty plastic Iris or TBS' trapped-in-a-kitchen banter on "Dinner and a Movie," which is so painful audiences wait through each segment hoping there will be a gas burner or blender accident. But at one time, even local stations employed announcers to introduce Ti' movies. Most Iowans remember a certain puppet dog, Floppy, that performed skits and jokes between cartoons. In the 1960s, WOI-TV Ames aired

"Gravesend Manor," which featured horror movies and a troupe of local actors doing campy sketches during commercial breaks. In Los Angeles, Elvira, Mistress of the Dark, rose to national stardom as a vampy horror movie host in the early '80s.

For "Sci-Fi Saturday Night's" sartorial introductions, Frisbie mixes in local events and fund-raising information with sci-fi explanations and trivia, and, in the tradition of "Gravesend Manor," mixes in some purposely bad acting.

He and the show's production team have considered spicing up the dated graphics, but it didn't seem right to pair high-tech with "Dr. Who," which is notorious for its low-budget effects. As producer Anne Frederickson says, "(The screensaver) seemed to go so well with 'Dr. Who,' which is ancient effects, but still good content. We have old effects that are kind of corny and we're trying to keep it that way."

The fans respect the integrity of "Sci-Fi Saturday Night," though Frisbie downplays his celebrity.

"I don't have fans," he says, "but I get recognized in some strange places. I was taking someone to the hospital in Iowa City at 10 in the morning and someone says, 'You're the guy who floats around.'"

The BBC makes stations pay a premium for rights to air the show, but loyal locals have paid up every year during regular PBS guilt trips — pledge time. Most of "Sci-Fi Saturday Night's" funding comes from fans.

"I think they feel marginalized and they stick together," Frisbie says. "They always show up during fund-raisers and man phones"

These strong supporters can also be loud detractors. "Dr. Who" is a constant, but !PTV shuffles the other program, rotating in series like the paranoid world of "The Prisoner."

"They're more than vocal when they don't like something," Frisbie says.

One move they didn't like came after Sept. 11, 2001, when the sci-fi night shifted from Friday to its current Saturday slot ITIV wanted to add BBC news and, to do it, the beloved "Sci-Fi Friday Night" had to go.

Frisbie says the network went out of its way to keep the program on the air, but fans didn't exactly thank IVTV for the favor. Friday nights weren't just a time for television. Some fans logged on to online chats to discuss the programs as they watched. Two years later, they're still irritated about -Sci-Fi Saturday Night"

"If you're a fan, it's near and dear to your heart," explains Jeremy Bement, manager of Mayhem Comics and vice president of UNIT, The Official Universal Network of Iowan Timelords. "When they switched it, people's plans were set for the weekend. On Friday night, I stay home and chat with friends; on Saturday night, I go out. People didn't want to change plans. That was the major outcry. After 20 years, people didn't want to switch their week." Even after 10 years, Frisbie hasn't tired of the show. With an experienced production team, which takes care of the costumes and all the details, Frisbie just writes his scripts and floats around in the show's cheesy outerspace. The show takes only one day every five weeks to tape.

"They're so professional, it's a piece of cake," he says.

Caption: Mike Frisbie is beloved by Iowa sci-fi fans for his eloquent intros and bizarre costumes.