The doctor is still in 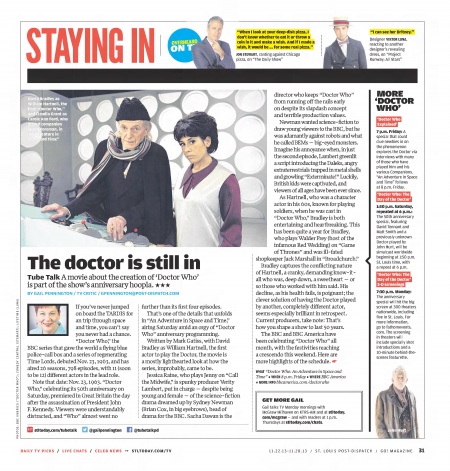 Tube Talk A movie about the creation of 'Doctor Who' is part of the show's anniversary hoopla. ★★★

If you've never jumped on board the TARDIS for an trip through space and time, you can't say you never had a chance. "Doctor Who;' the

BBC series that gave the world a flying blue police-call box and a series of regenerating Time Lords, debuted Nov. 23, 1963, and has aired 26 seasons, 798 episodes, with 11 (soon to be 12) different actors in the lead role.

Note that date: Nov. 23, 1963. "Doctor Who," celebrating its 50th anniversary on Saturday, premiered in Great Britain the day after the assassination of President John F. Kennedy. Viewers were understandably distracted, and "Who" almost went no further than its first four episodes.

Written by Mark Gatiss, with David Bradley as William Hartnell, the first actor to play the Doctor, the movie is a mostly lighthearted look at how the series, improbably, came to be.

Jessica Raine, who plays Jenny on "Call the Midwife," is spunky producer Verity Lambert, put in charge — despite being young and female — of the science-fiction drama dreamed up by Sydney Newman (Brian Cox, in big eyebrows), head of drama for the BBC. Sacha Dawan is the director who keeps "Doctor Who" from running off the rails early on despite its slapdash concept and terrible production values.

Newman wanted science-fiction to draw young viewers to the BBC, but he was adamantly against robots and what he called BEMs — big-eyed monsters. Imagine his annoyance when, in just the second episode, Lambert greenlit a script introducing the Daleks, angry extraterrestrials trapped in metal shells and growling "Exterminate!" Luckily, British kids were captivated, and viewers of all ages have been ever since.

As Hartnell, who was a character actor in his 6os, known for playing soldiers, when he was cast in

"Doctor Who," Bradley is both entertaining and heartbreaking. This has been quite a year for Bradley, who plays Walder Frey (host of the infamous Red Wedding) on "Game of Thrones" and was ill-fated shopkeeper Jack Marshall in "Broadchurch."

Bradley captures the conflicting nature of Hartnell, a cranky, demanding know-it - all who was, deep down, a sweetheart — or so those who worked with him said. His decline, as his health fails, is poignant; the clever solution of having the Doctor played by another, completely different actor, seems especially brilliant in retrospect. Current producers, take note: That's how you shape a show to last 50 years.

The BBC and BBC America have been celebrating "Doctor Who" all month, with the festivities reaching a crescendo this weekend. Here are more highlights of the schedule.

WHAT "Doctor Who: An Adventure in Space and Time" • WHEN 8 p.m. Friday • WHERE BBC America

Caption: David Bradley as Hartnell, the Doctor Who," and Claudia Grant as Carole Ann Ford, who played companion Susan Foreman, in "An Adventure in Space and Time"

7 p.m. Friday: A special that could clue newbies in on the phenomenon explores the Doctor via interviews with many of those who have played him and his various Companions. "An Adventure in Space and Time" follows at 8 p.m. Friday.

'Doctor Who: The Day of the Doctor'

1:50 p.m. Saturday, repeated at 6 p.m.: The 50th anniversary special, featuring David Tennant and Matt Smith and a previously unknown Doctor played by John Hurt, will be simulcast worldwide beginning at 1:50 p.m. St. Louis time, with a repeat at 6 p.m.

'Doctor Who: The Day of the Doctor' 3-D screenings

7:30 p.m. Monday: The anniversary special will hit the big screen at 300 theaters nationwide, including five in St. Louis. For more information, go to fathomevents. com. The screening in theaters will include specially shot introductions and a 10-minute behind-the-scenes featurette.