The force is strong at Peco's sci-fi day 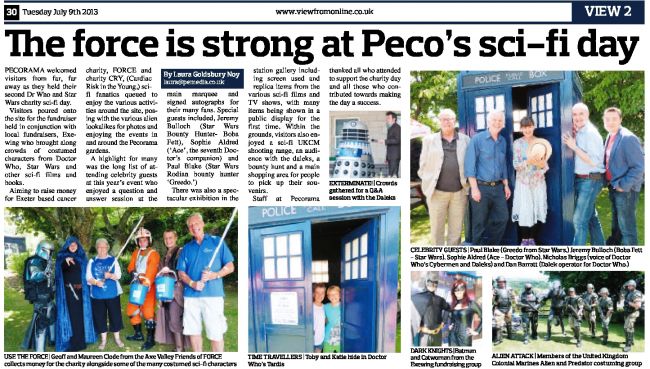 PECORAMA welcomed visitors from far, far away as they held their second Dr Who and Star Wars charity sci-fi day. Visitors poured onto the site for the fundraiser held in conjunction with local fundraisers, Exe-wing who brought along crowds of costumed characters from Doctor Who, Star Wars and other sci-fi films and books.

Aiming to raise money for Exeter based cancer chanty, FORCE and charity CRY, (Cardiac Risk in the Young,) sci-fi fanatics queued to enjoy the various activities around the site, posing with the various alien lookalikes for photos and enjoying the events in and around the Pecorama gardens.

A highlight for many was the long list of attending celebrity guests at this year's event who enjoyed a question and answer session at the main marquee and signed autographs for their many fans. Special guests included, Jeremy Bulloch (Star Wars Bounty Hunter- Boba Fett), Sophie Aldred ('Ace', the seventh Doctor's companion) and Paul Blake (Star Wars Rodian bounty hunter 'Greedo.')

There was also a spectacular exhibition in the station gallery including screen used and replica items from the various sci-fi films and TV shows, with many items being shown in a public display for the first time. Within the grounds, visitors also enjoyed a sci-fi UKCM shooting range, an audience with the daleks, a bounty hunt and a main shopping area for people to pick up their souvenirs.

Staff at Pecorama thanked all who attended to support the charity day and all those who contributed towards making the day a success.

EXTERMINATE! Crowds gathered for a Q&A session with the Daleks

TIME TRAVELLERS Toby and Katie hide in Doctor Who's Tardis

DARK KNIGHTS Batman and Catwoman from the Exewing fundraising group