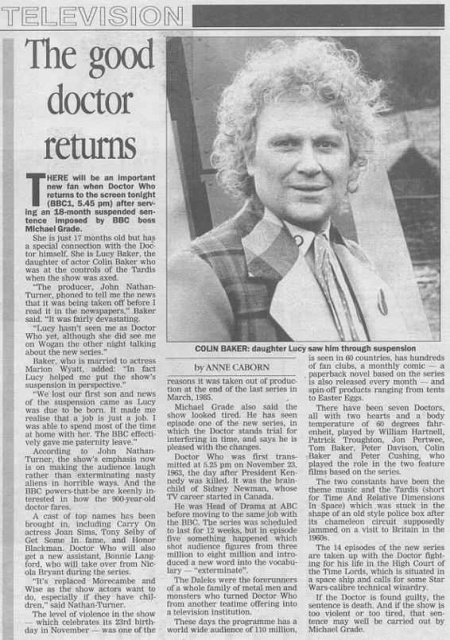 THERE will be an important new fan when Doctor Who returns to the screen tonight (BBC1 5.45 pm) after serving an 18-month suspended sentence imposed by BBC boss Michael Grade.

She is just 17 months old but has a special connection with the Doctor himself. She is Lucy Baker, the daughter of actor Colin Baker who was at the controls of the Tardis when the show was axed.

"The producer, John Nathan-Turner, phoned to tell me the news that it was being taken off before I read it in the newspapers," Baker said. "It was fairly devastating.

"Lucy hasn't seen me as Doctor Who yet, although she did see me on Wogan the other night talking about the new series."

Baker, who is married to actress Marion Wyatt, added: "In fact Lucy helped me put the show's suspension in perspective."

"We lost our first son and news of the suspension came as Lucy was due to be born. It made me realise that a job is just a jab. I was able to spend most of the time at home with her. The BBC effectively gave me paternity leave.'

According to John Nathan-Turner, the show's emphasis now is on making the audience laugh rather than exterminating nasty aliens in horrible ways. And the BBC powers-that-be are keenly interested in how the 900-year-old doctor fares.

A cast of top names has been brought in, including Carry On actress Joan Sims, Tony Selby of Get Some In fame, and Honor Blackman. Doctor Who will also get a new assistant, Bonnie Langford, who will take over from Nicola Bryant during the series.

"It's replaced Morecambe and Wise as the show actors want to do, especially if they have children," said Nathan-Turner.

The level of violence in the show — which celebrates its 23rd birthday in November — was-one of the reasons It was taken out of production at the end of the last series in March, 1985.

Michael Grade also said the show looked tired. He has seen episode one of the new series, in which the Doctor stands trial for interfering in time, and says he is pleased with the changes.

Doctor Who was first transmitted at 5.25 pm on November 23, 1963, the day after President Kennedy was killed. It was the brainchild of Sidney Newman, whose TV career started in Canada.

He was Head of Drama at ABC before molting to the same job with the BBC. The series was scheduled to last for 12 weeks, but in episode five something happened which shot audience figures from three million to eight million and introduced a new word into the vocabulary — "exterminate".

The Daleks were the forerunners of a whole family of metal men and monsters who turned Doctor Who from another teatime offering into a television institution.

These days the programme has a world wide audience of 110 million, is seen in 60 countries, has hundreds of fan clubs, a monthly-comic — a paperback novel based on the series is also released every month — and spin-off products ranging from tents to Easter Eggs.

There have been seven Doctors, all with two hearts and a body temperature of 60 degrees Fahrenheit, played by William Hartnell, Patrick Troughton, Jon Pertwee, Tom Baker, Peter Davison, Colin Baker and Peter Cushing, who played the role in the two feature films based on the series

The two constants have been the theme music and the Tardis (short for Time And Relative Dimensions In Space) which was stuck in the shape of an old style police box after its chameleon circuit supposedly jammed on a visit to Britain in the 1960s.

The 14 episodes of the new series are taken up with the Doctor fighting for his life in the High Court of the Time Lords, which is situated in a space ship and calls for some Star Wars-calibre technical wizardry.

If the Doctor is found guilty, the sentence is death. And if the show is too violent or too tired, that sentence may well be carried out by Michael Grade.