The king of cut and stick 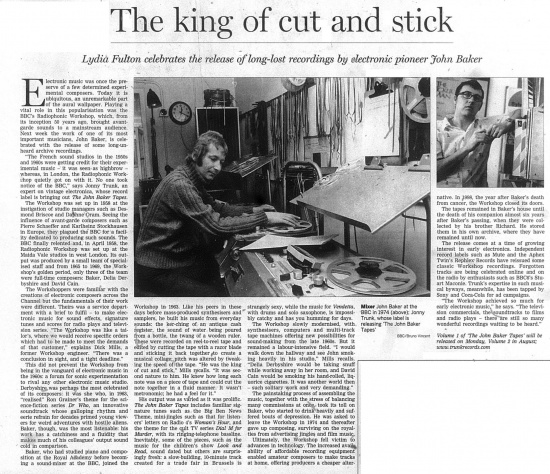 Electronic music was once the preserve of a few determined experimental composers. Today it is ubiquitous, an unremarkable part of the aural wallpaper. Playing a vital role in this popularisation was the BBC's Radiophonic Workshop, which, from its inception 50 years ago, brought avant-garde sounds to a mainstream audience. Next week the work of one of its most important musicians, John Baker, is celebrated with the release of some long-unheard archive recordings.

"The French sound studios in the 1950s and 1960s were getting credit for their experimental music - it was seen as highbrow - whereas, in London, the Radiophonic Workshop quietly got on with it. No one took notice of the BBC," says Jonny Trunk, an expert on vintage electronica, whose record label is bringing out The John Baker Tapes .

The Workshop was set up in 1958 at the instigation of studio managers such as Desmond Briscoe and Daphne Oram. Seeing the influence of avant-garde composers such as Pierre Schaeffer and Karlheinz Stockhausen in Europe, they plagued the BBC for a facility dedicated to producing such sounds. The BBC finally relented and, in April 1958, the Radiophonic Workshop was set up at the Maida Vale studios in west London. Its output was produced by a small team of specialised staff and from 1965 to 1969, the Workshop's golden period, only three of the team were full-time composers: Baker, Delia Derbyshire and David Cain.

The Workshoppers were familiar with the creations of electronic composers across the Channel but the fundamentals of their work were different. Theirs was a service department with a brief to fulfil - to make electronic music for sound effects, signature tunes and scores for radio plays and television series. "The Workshop was like a tailor's, where we would receive specific orders which had to be made to meet the demands of that customer," explains Dick Mills, a former Workshop engineer. "There was a conclusion in sight, and a tight deadline."

This did not prevent the Workshop from being in the vanguard of electronic music in the 1960s: a forum for sonic experimentation to rival any other electronic music studio. Derbyshire was perhaps the most celebrated of its composers: it was she who, in 1963, "realised" Ron Grainer's theme for the science-fiction series Dr Who, an innovative soundtrack whose galloping rhythm and eerie refrain for decades primed young viewers for weird adventures with hostile aliens. Baker, though, was the most listenable: his work has a catchiness and a fluidity that makes much of his colleagues' output sound cold in comparison.

Baker, who had studied piano and composition at the Royal Academy before becoming a sound-mixer at the BBC, joined the Workshop in 1963. Like his peers in these days before mass-produced synthesisers and samplers, he built his music from everyday sounds: the kerching of an antique cash register, the sound of water being poured from a bottle, the twang of a wooden ruler. These were recorded on reel-to-reel tape and edited by cutting the tape with a razor blade and sticking it back together to create a musical collage; pitch was altered by tweaking the speed of the tape. "He was the king of cut and stick," Mills recalls. "It was second nature to him. He knew how long each note was on a piece of tape and could cut the note together in a fluid manner. It wasn't metronomic; he had a feel for it."

His output was as varied as it was prolific. The John Baker Tapes includes familiar signature tunes such as the Big Ben News Theme, mini-jingles such as that for listeners' letters on Radio 4's Woman's Hour , and the theme for the cult TV series Dial M for Murder , with its ringing-telephone bassline. Inevitably, some of the pieces, such as the music for the children's show Look and Read , sound dated but others are surprisingly fresh: a slow-building, 10-minute track created for a trade fair in Brussels is strangely sexy, while the music for Vendetta , with drums and solo saxophone, is impossibly catchy and has you humming for days.

The Workshop slowly modernised, with synthesisers, computers and multi-track tape machines offering new possibilities for sound-making from the late 1960s. But it remained a labour-intensive field. "I would walk down the hallway and see John smoking heavily in his studio," Mills recalls. "Delia Derbyshire would be taking snuff while working away in her room, and David Cain would be smoking his hand-rolled, liquorice cigarettes. It was another world then - such solitary work and very demanding."

The painstaking process of assembling the music, together with the stress of balancing many commissions at once, took its toll on Baker, who started to drink heavily and suffered bouts of depression. He was asked to leave the Workshop in 1974 and thereafter gave up composing, surviving on the royalties from advertising jingles and film music.

Ultimately, the Workshop fell victim to advances in technology. The increased availability of affordable recording equipment enabled amateur composers to make tracks at home, offering producers a cheaper alternative. In 1998, the year after Baker's death from cancer, the Workshop closed its doors.

The tapes remained in Baker's house until the death of his companion almost six years after Baker's passing, when they were collected by his brother Richard. He stored them in his own archive, where they have remained until now.

The release comes at a time of growing interest in early electronica. Independent record labels such as Mute and the Aphex Twin's Rephlex Records have reissued some classic Workshop recordings. Forgotten tracks are being celebrated online and on the radio by enthusiasts such as BBC6's Stuart Maconie. Trunk's expertise in such musical byways, meanwhile, has been tapped by Sony and Coca-Cola for ad campaigns.

"The Workshop achieved so much for early electronic music," he says. "The television commercials, the soundtracks to films and radio plays - there are still so many wonderful recordings waiting to be heard."

Volume 1 of 'The John Baker Tapes' will be released on Monday, Volume 2 in August; www.trunkrecords.com