The local advent of Dr. Who 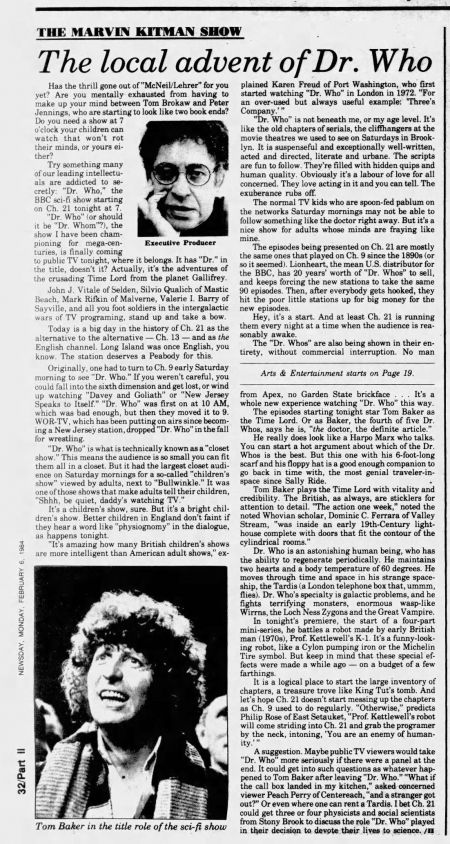 Has the thrill gone out of "McNeill/Lehrer" for you yet? Are you mentally exhausted from having to make up your mind between Tom Brokaw and Peter Jennings, who are starting to look like two book ends? Do you need a show at 7 o'clock your children can watch that won't rot their minds, or yours either?

Try something many of our leading intellectuals are addicted to secretly: "Dr. Who," the BBC sci-fi show starting on Ch. 21 tonight at 7.

"Dr. Who" (or should it be "Dr. Whom"?), the show I have been championing for mega-centuries, is finally coming to public TV tonight, where it belongs. It has "Dr." in the title, doesn't it? Actually, it's the adventures of the crusading Time Lord from the planet Gallifrey.

John J. Vitale of Selden, Silvio Qualich of Mastic Beach, Mark Rifkin of Malverne, Valerie I. Barry of Sayville, and all you foot soldiers in the intergalactic wars of TV programing, stand up and take a bow.

Today is a big day in the history of Ch. 21 as the alternative to the alternative — Ch. 13 — and as the English channel. Long Island was once English, you know. The station deserves a Peabody for this.

Originally, one had to turn to Ch. 9 early Saturday morning to see "Dr. Who." If you weren't careful, you could fall into the sixth dimension and get lost, or wind up watching "Davey and Goliath" or "New Jersey Speaks to Itself." "Dr. Who" was first on at 10 AM, which was bad enough, but then they moved it to 9. WOR-TV, which has been putting on airs since becoming a New Jersey station, dropped "Dr. Who" in the fall for wrestling.

"Dr. Who" is what is technically known as a "closet show." This means the audience is so small you can fit them all in a closet. But it had the largest closet audience on Saturday mornings for a so-called "children's show" viewed by adults, next to "Bullwinkle." It was one of those shows that make adults tell their children, "Shhh, be quiet, daddy's watching TV."

It's a children's show, sure. But it's a bright children's show. Better children in England don't faint if they hear a word like "physiognomy" in the dialogue, as happens tonight.

"It's amazing how many British children's shows are more intelligent than American adult shows," explained Karen Freud of Port Washington, who first started watching "Dr. Who" in London in 1972. "For an over-used but always useful example: 'Three's Company.'"

"Dr. Who" is not beneath me, or my age level. It's like the old chapters of serials, the cliffhangers at the movie theatres we used to see on Saturdays in Brooklyn. It is suspenseful and exceptionally well-written, acted and directed, literate and urbane. The scripts are fun to follow. They're filled with hidden quips and human quality. Obviously it's a labour of love for all concerned. They love acting in it and you can tell. The exuberance rubs off.

The normal TV kids who are spoon-fed pablum on the networks Saturday mornings may not be able to follow something like the doctor right away. But it's a nice show for adults whose minds are fraying like mine.

The episodes being presented on Ch. 21 are mostly the same ones that played on Ch. 9 since the 1890s (or so it seemed). Lionheart, the mean U.S. distributor for the BBC, has 20 years' worth of "Dr. Whos" to sell, and keeps forcing the new stations to take the same 90 episodes. Then, after everybody gets hooked, they hit the poor little stations up for big money for the new episodes.

Hey, it's a start. And at least Ch. 21 is running them every night at a time when the audience is reasonably awake.

The "Dr. Whos" are also being shown in their entirety, without commercial interruption. No man from Apex, no Garden State brickface ... It's a whole new experience watching "Dr. Who" this way.

The episodes starting tonight star Tom Baker as the Time Lord. Or as Baker, the fourth of five Dr. Whos, says he is, "the doctor, the definite article."

He really does look like a Harpo Marx who talks. You can start a hot argument about which of the Dr. Whos is the best. But this one with his 6-foot-long scarf and his floppy hat is a good enough companion to go back in time with, the most genial traveler-in-space since Sally Ride.

Tom Baker plays the Time Lord with vitality and credibility. The British, as always, are sticklers for attention to detail. "The action one week," noted the noted Whovian scholar, Dominic C. Ferrara of Valley Stream, "was inside an early 19th-Century lighthouse complete with doors that fit the contour of the cylindrical rooms."

Dr. Who is an astonishing human being, who has the ability to regenerate periodically. He maintains two hearts and a body temperature of 60 degrees. He moves through time and space in his strange spaceship, the Tardis (a London telephone box that, ummm, flies). Dr. Who's specialty is galactic problems, and he fights terrifying monsters, enormous wasp-like Wirrns, the Loch Ness Zygons and the Great Vampire.

In tonight's premiere, the start of a four-part mini-series, he battles a robot made by early British man (1970s), Prof. Kettlewell's K-1. It's a funny-looking robot, like a Cylon pumping iron or the Michelin Tire symbol. But keep in mind that these special effects were made a while ago — on a budget of a few farthings.

It is a logical place to start the large inventory of chapters, a treasure trove like King Tut's tomb. And let's hope Ch. 21 doesn't start messing up the chapters as Ch. 9 used to do regularly. "Otherwise," predicts Philip Rose of East Setauket, "Prof. Kettlewell's robot will come striding into Ch. 21 and grab the programer by the neck, intoning, 'You are an enemy of humanity.'"

A suggestion. Maybe public TV viewers would take "Dr. Who" more seriously if there were a panel at the end. It could get into such questions as whatever happened to Tom Baker after leaving "Dr. Who." "What if the call box landed in my kitchen," asked concerned viewer Peach Perry of Centereach, "and a stranger got out?" Or even where one can rent a Tardis. I bet Ch. 21 could get three or four physicists and social scientists from Stony Brook to discuss the role "Dr. Who" played in their decision to devote their lives to science. in

Caption: Tom Baker in the title role of the sci-fi show