The man who makes Daleks 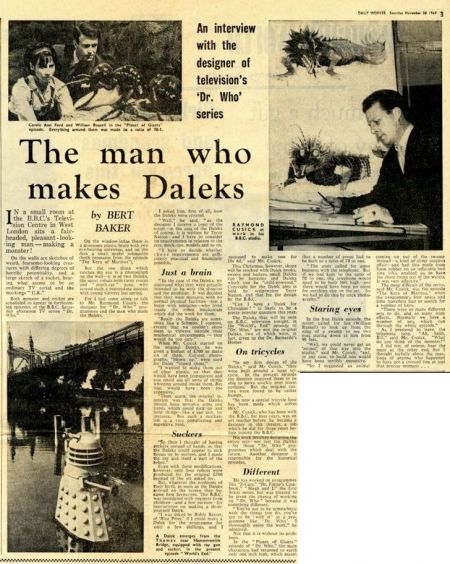 An interview with the designer of television's 'Dr. Who' series

In a small room at the B.B.C.'s Television Centre in West London, sits a fair-headed, pleasant-looking man - making a monster!

On the walls are sketches of weird are, fearsome-looking creatures with differing degrees of her horrific potentiality, and a large sketch another rocket, bearing what seems to be an ordinary TV serial and the markings "U.K."

Both monster and rockets are scheduled to appear in forthcoming episodes of the BBC's Saturday afternoon TV series Dr. Who.

On the window-ledge that there is a gruesome plastic brain with two eye-bearing antenna, and on the desk, a small models submarine (both remnants from the episode "The Keys of Marinus").

But the one thing which catches my eye is a photograph on the wall - is of two Daleks, the squat robots with tinny voices and "death-ray" guns, who scored such a resounding success with young viewers last series.

Before I had come along to talk to Mr. Raymond Cusick, the designer for "Dr. Who" programmes and the man who made the Daleks.

I asked him, first of all, how the Daleks were created.

"Well," he said, "as the designer I receive a copy of the script - in the case of the Daleks of course, it is written by Terry Nation - and I have to consider its requirements in relation to the sets, mock-ups, models and so on.

"I have to decide whether these requirements are sufficiently practical and financially possible.

"In the case of the Daleks, we discussed what they were actually intended to be with the director and producer. It was decided that they were mutants, with no normal physical facilities - just a brain and tentacles - who lived inside a robot mechanism which did the work for them

"Really the Daleks are something like a [?], I suppose, except that we couldn't allow the viewers outside their mechanical encasements - they would be too ugly."

When Mr. Cusick started on the original Daleks, he was given a budget of £700 to make six of them. Cut-out photographs, "blown up" were used for Dalek "crowd shots."

I wanted to make them out of clear plastic, so that they would have been transparent and you can see all sorts of things whizzing around inside them. But that would have been too expensive.

But then, again, the original intention was that the Daleks should have movable arms, enhance which could pick up and hold things - like a ray gun, for instance. But such a mechanism is a very complicated and expensive item.

"So then I thought of having suckers instead of hands, so that the Daleks could appear to pick up the things up by suction, and I made the ray gun itself a part of the robot."

Even with these modifications, however, only four robots were produced for the original £700 instead of the six asked for.

But, whatever the problems of their birth, as soon as the Daleks arrived on our screen they became firm favourites. The B.B.C. was inundated with requests from children - and a few parents - for instructions on making do-it-yourself Dalek.

"I was asked by Biddy Baxter, of 'Blue Peter', if I could make a Dalek for the programme for only a few shillings and I managed to make one for 10s 6d," said Mr. Cusick.

This Christmas, however, shops will be stocked with Dalek books, sweets and badges, small Daleks run by batteries and Daleks which can be "child-powered." Copyright for the Dalek idea is held by screenwriter Terry Nation, and that for the design by the BBC.

"Can I have a Dalek for Christmas?" is likely to be a pretty popular question this year.

The Daleks that will be seen on B.B.C. Television tonight in the "World's End" episode of Dr. Who are not the original Daleks, two of whiGiven to the Dr. Barnardo's Holmes.

"In my first design of the Daleks, said Mr. Cusick, "they were built around a large tricycle. In the present episode the director required them to be able to move quickly over street surfaces. But the original castors were found to be rather bumpy.

"So now a special tricycle has been made which solves this."

Mr. Cusick, who has been with the B.B.C. for four years, was an art teacher before he became a designer in the theatre, a job which he did for three years before joining the B.B.C.

His work involves designing the entire sets - not just the Daleks - for those "Dr. Who" programmes which deal with the future. Another designer is responsible for the historical episodes.

He has worked on programmes like "Z Cars", "Dr. Finley's Casebook," "Hugh and I", the Eric Sykes series, but was pleased to be given the chance of working on "Dr. Who" because it was something different.

"You've got to be sympathetic with the things you do, you've got to be 'with it' in a programme like 'Dr. Who'. I thoroughly enjoy the work," he admitted.

Not that it is without its problems.

In the "Planet of Giants" episode of "Dr. Who," the main characters had returned to earth only on inch high which meant

The story called for some business with the telephone. But if we had kept the ratio of 70 to 1, the telephone would need to be 16 feet high and there would have been no room for anything else on the set. So we had to do this by Kate that I repeat.

In the first Dalek episode, the script called for Ian William Russell to look up from the edge of us want to see two eyes staring down at him from 40 feet.

Well, we could never get an animal or of that size into the studio, said Mr. Cusick, and in any case, to build one would have been terribly expensive.

So I suggested an animal coming up out of the swamp instead - a kind of slimy octopus affair and had this made from foam rubber on an inflatable bed ring. This enabled us to have the thing rising out of the waters. It is very effective.

The most difficult of the series, said Mr. Cusick, was the episode "The Keys of Marinus," when the programme's of four space and time travellers had a search for a number of keys.

"There were so many different sets to do, and so many trick effects. Normally we have a number of sets which one through the whole episode."

As I prepared to leave, the telephone rang. "Ah, hello, Bill," said Mr. Cusick. "What you think of the monster?"

I did not, of course, here the reply at the other hand, but I thought joyfully about the reactions of everyone who happened to have got a crossed line at just that precise moment ...

Carole Ann Ford and William Russell in the "Planet of Giants" episode. Everything around them was made to a ratio of 70-1.

Raymond Cusick at work in his B.B.C. studio.

A Dalek emerges from the Thames near Hammersmith Bridge, equipped with ray gun and sucker, in the present episode "World's End."