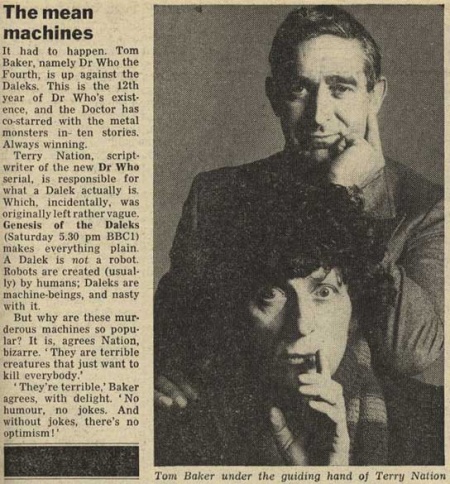 It had to happen. Tom Baker, namely Dr Who the Fourth, is up against the Daleks. This is the 12th year of Dr Who's existence, and the Doctor has co-starred with the metal monsters in ten stories. Always winning.

Terry Nation, script-writer of the new Dr Who serial, is responsible for what a Dalek actually is. Which, incidentally, was originally left rather vague. Genesis of the Daleks (Saturday 5.30 pm BBC1) makes everything plain. A Dalek is not a robot. Robots are created (usually) by humans; Daleks are machine-beings and nasty with it.

But why are these murderous machines so popular? It is, agrees Nation, bizarre. 'They are terrible creatures that just want to kill everybody.'

'They're terrible,' Baker agrees, with delight. 'No humour, no jokes. And without jokes, there's no optimism.