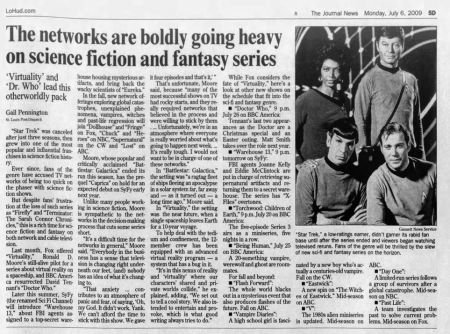 'Virtuality' and 'Dr. Who' lead this otherworldly pack

"Star Trek" was canceled after just three seasons, then grew into one of the most popular and influential franchises in science fiction history.

Ever since, fans of the genre have accused TV networks of being too quick on the phaser with science fiction shows.

But despite fans' frustration at the loss of such series as "Firefly" and 'Terminator: The Sarah Connor Chronicles: this is a rich time for science fiction and fantasy on both network and cable television.

Later this summer, SyFy (the renamed Sci Fi Channel) will introduce "Warehouse 13," about FBI agents assigned to a top-secret ware house housing mysterious artifacts, and bring back the wacky scientists of "Eureka."

In the fall, new network offerings exploring global catastrophes, unexplained phenomena, vampires, witches and past-life regression will join "Dollhouse and "Fringe" on Fox, "Chuck" and "Heroes" on NBC, "Supernatural" on the CW and "Lost" on ABC.

Moore, whose popular and critically acclaimed "Bat-tlestar: Galactica" ended its run this season, has the prequel "Caprica" on hold for an expected debut on SyFy early next year.

Unlike many people working in science fiction, Moore is sympathetic to the networks in the decision-making process that cuts some series short

"It's a difficult time for the networks in general," Moore said. "Everybody in the business has a sense that television is changing right underneath our feet, (and) nobody has an idea of what its changing to.

'That anxiety ... contributes to an atmosphere of panic and fear, of saying, 'Oh, my God. It didn't work. Yank. We can't afford the time to stick with this show. We gave it four episodes and that's it; "

That's unfortunate. Moore said, because "many of the most successful shows on TV had rocky starts, and they really required networks that believed in the process and were willing to stick by them .... Unfortunately, we're in an atmosphere where everyone is really worried about what's going to happen next week.... It's really tough. I would not want to be in charge of one of these networks."

In "Battlestar Galactica," the setting was "a ragtag fleet of ships fleeing an apocalypse in a solar system far, far away and — as it turned out — a long time ago," Moore said.

In "Virtuality," the setting was the near future, when a single spaceship leaves Earth for a 10-year voyage.

To help deal with the tedium and confinement, the 12-member crew has been equipped with an advanced virtual reality program — a system that has a bug in it.

"It's in this nexus of reality and 'virtuality' where our characters' shared and private worlds collide," he explained, adding, "We set out to tell a cool story. We also intended to entertain and proyoke, which is what good writing always tries to do."

While Fox considers the fate of "Virtuality," here's a look at other new shows on the schedule that fit into the sci-fi and fantasy genre.

Tenant's last two appearances as the Doctor are a Christmas special and an Easter outing. Matt Smith takes over the role next year.

FBI agents Joanne Kelly and Eddie McClintock are put in charge of retrieving supernatural artifacts and returning them to a secret warehouse. The series has 'A-Files" overtones.

The five-episode Series 3 airs as a miniseries, five nights in a row.

A 20-something vampire, werewolf and ghost are roommates.

For fall and beyond:

The whole world blacks out in a mysterious event that also produces flashes of the future. Fall on ABC.

A new spin on The Witches of Eastwick." Mid-season on ABC.

The 1980s alien miniseries is updated. Mid-season on ABC.

A limited-run series follows a group of survivors after a global catastrophe. Mid-season on NBC.

A team investigates the past to solve current problems. Mid-season on Fox.

Caption: "Star Trek," a low-ratings earner, didn't garner its rabid fan base until after the series ended and viewers began watching televised reruns. Fans of the genre will be thrilled by the slew of new sci-fi and fantasy series on the horizon.