The nice Mr. Briers gets nasty 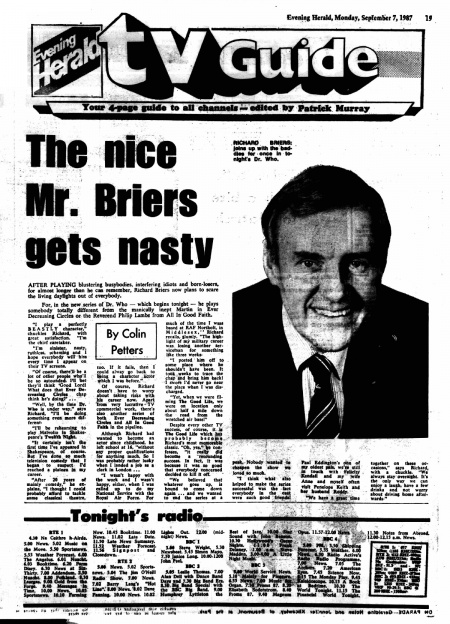 AFTER PLAYING blustering busy-bodies, interfering idiots and born-losers, for almost longer than he can remember, Richard Briers now plans to scare the living daylights out of everybody.

For, in the new series of Dr. Who which begins tonight he plays somebody totally different from the manically inept Martin in Ever Decreasing Circles or the Reverend Philip Lambe from All In Good Faith.

"I play a perfectly BEASTLY character," chuckles Richard, with great satisfaction. "I'm the chief caretaker. "I'm sinister, nasty, ruthless, scheming and I hope everybody will hiss every time I appear on their TV screens.

"Of course, there'll be a lot of other people who'll be so astounded. I'll bet they'll think 'Good Lord! What does that Ever Decreasing Circles chap think he's doing?' ...

"Well, by the time Dr. Who is under way," says Richard, "I'll be doing something even more different.

"I'll be rehearsing to play Malvolio in Shakespeare's Twelfth Night.

"It certainly isn't the first time I've appeared in Shakespeare, of course. But I've done so much television comedy that I began to suspect I'd reached a plateau in my career.

"After 20 years of mainly comedy," he explains, "I thought I could probably afford to tackle some classical theatre, too. If it fails, then I could always go back to being a character actor which I was before."

Of course, Richard doesn't have to worry about taking risks with his career now. Apart from very lucrative TV commercial work, there's also another series of both Ever Decreasing Circles and All In Good Faith in the pipeline.

Although Richard had wanted to become an actor since childhood, he left school at 16, "without any proper qualifications for anything much. So I was probably rather lucky when I landed a job as a clerk in London ...

"I wasn't happy with the work and I wasn't happy, either, when I was called up to do my National Service with the Royal Air Force. For much of the time I was based at RAF Northolt, in Middlesex," Richard recalls, glumly. "The highlight of my military career was losing another serviceman for something like three weeks.

"I posted him off to some place where he shouldn't have been. It took weeks to trace the chap and bring him back! I swore I'd never go near the place when I was discharged.

"Yet, when we were filming The Good Life, we were on location only about half a mile down the road from the wretched air base!"

Despite every other TV success, of course, it is The Good Life which has probably become Richard's most memorable classic. "Oh, yes," be confesses, "it really did become a resounding success. In fact, it was because it was so good that everybody concerned decided to kill it off.

"We believed whatever goes up, bound to come down again ... and we wanted to end the series at a peak. Nobody wanted to cheapen the show we love so much.

"I think what also helped to make the series successful was the fact everybody in the cast were such good friends! Paul Eddington's one of my oldest pals, we're still in touch with Felicity Kendall and my wife Anne and myself often visit Penelope Keith and husband Roddy.

"We have a great time together on these occasions," says Richard, with a chuckle. "We always stay overnight. It's the only way we can enjoy a laugh, have a few drinks and not worry about driving home afterwards."

Caption: RICHARD BRIERS: joins up with the baddies for once in tonight's Dr. Who.