The return of Who 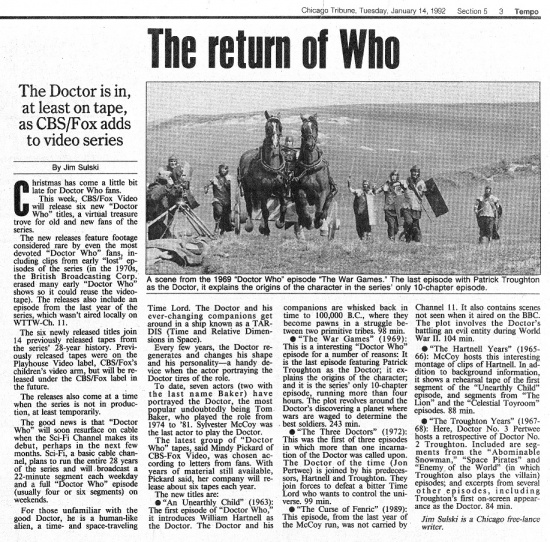 The Doctor is in, at least on tape, as CBS/Fox adds to video series

Christmas has come a little bit late for Doctor Who fans.

This week, CBS/Fox Video will release six new "Doctor Who" titles, a virtual treasure trove for old and new fans of the series.

The new releases feature footage considered rare by even the most devoted "Doctor Who" fans, including clips from early "lost" episodes of the series (in the 1970s, the British Broadcasting Corp. erased many early "Doctor Who" shows so it could reuse the videotape). The releases also include an episode from the last year of the series, which wasn't aired locally on WTTW-Ch. 11.

The good news is that "Doctor Who" will soon resurface on cable TV when the Sci-Fi Channel makes its debut, perhaps in the next few months. Sci-Fi, a basic cable channel, plans to run the entire 28 years of the series and will broadcast a 22-minute segment each weekday and a full "Doctor Who" episode (usually four or six segments) on weekends.

For those unfamiliar with the good Doctor, he is a human-like alien, a timeand space-traveling Time Lord. The Doctor and his ever-changing companions get around in a ship known as a TARDIS (Time and Relative Dimensions in Space).

Every few years, the Doctor regenerates and changes his shape and his personality—a handy device when the actor portraying the 'Doctor tires of the role. To date, seven actors (two with the last name Baker) have portrayed the Doctor, the most popular undoubtedlybeing Tom Baker, who played the role from 1974 to '81. Sylvester McCoy was the last actor to play the Doctor.

The latest group of "Doctor Who" tapes, said Mindy Pickard of CBS-Fox Video, was chosen according to letters from fans. With years of material still available, Pickard said, her company will release about six tapes each year.

The new titles are:

• "An Unearthly Child" (1963): The first episode of "Doctor Who," it introduces William Hartnell as the Doctor. The Doctor and his companions are whisked back in time to 100,000 B.C., where they become pawns in a struggle between two primitive tribes. 98 min.

• "The War Games" (1969): This is a interesting "Doctor Who" episode for a number of reasons: It is the last episode featuring Patrick Troughton as the Doctor; it explains the origins of the character, and it is the series' only 10-chapter episode, running more than four hours. The plot revolves around the Doctor's discovering a planet where wars are waged to determine the best soldiers. 243 min.

• "The Three Doctors" (1972): This was the first of three episodes in which more than one incarnation of the Doctor was called upon. The Doctor of the time (Jon Pertwee) is joined by his predecessors, Hartnell and Troughton. They join forces to defeat a bitter Time Lord who wants to control the universe. 99 min.

• "The Curse of Fenric" (1989): This episode, from the last year of the McCoy run, was not carried by Channel 11. It also contains scenes not seen when it aired on the BBC. The plot involves the Doctor's battling an evil entity during World War II. 104 min.

• "The Hartnell Years" (196566): McCoy hosts this interesting montage of clips of Hartnell. In addition to background information, it shows a rehearsal tape of the first segment of the "Unearthly Child" episode, and segments from "The Lion" and the "Celestial Toyroom" episodes. 88 min.

• "The Troughton Years" (196768): Here, Doctor No. 3 Pertwee hosts a retrospective of Doctor No. 2 Troughton. Included are segments from the "Abominable Snowman," "Space Pirates" and "Enemy of the World" (in which Troughton also plays the villain) episodes; and excerpts from several other episodes, including Troughton's first on-screen appearance as the Doctor. 84 min.

Caption: A scene from the 1969 "Doctor Who" episode "The War Games." The last episode with Patrick Troughton as the Doctor, it explains the origins of the character in the series' only 10-chapter episode.