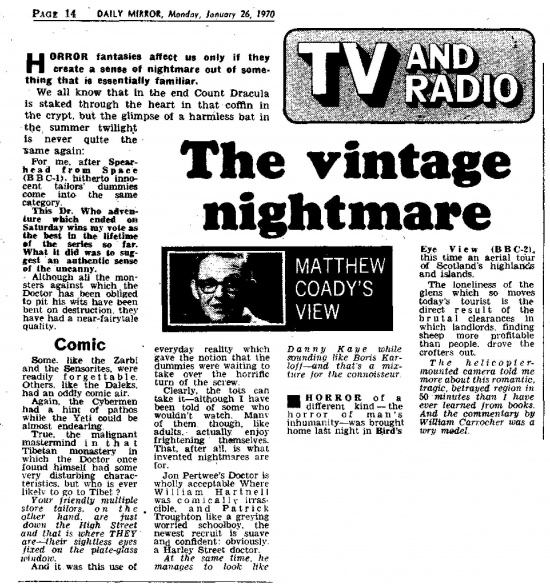 HORROR fantasies affect us only if they create a sense of nightmare out of something that is essentially familiar.

We all know that in the end Count Dracula is staked through the heart in that coffin in the crypt, but the glimpse of a harmless bat in the, summer twilight is never quite the same again:

For me, after Spearhead from Space (B B C-1), hitherto innocent tailors' dummies come into the same category.

This Dr. Who adventure which ended on Saturday wins my vote as the best in the lifetime of the series so far. What it did was to suggest an authentic sense of the uncanny.

Although all the monsters against which the Doctor has been obliged to pit his wits have been bent on destruction, they have had a near-fairytale quality.

Some, like the Zarbi and the Sensorites, were readily forgettable. Others, like the Daleks, had an oddly comic air.

Again, the Cybermen had a hint of pathos while the Yeti could be almost endearing.

True, the malignant mastermind in that Tibetan monastery in which the Doctor once found himself had some very disturbing characteristics, but who is ever likely to go to Tibet ?

Your friendly multiple store tailors, on the other hand. are just down the High Street and that is where THEY are—their sightless eyes fixed on the plate-glass window.

And it was this use of everyday reality which gave the notion that the dummies were waiting to take over the horrific turn of the screw.

Clearly, the tots can take it—although I have been told of some who wouldn't watch. Many of them. though, like adults, actually enjoy frightening themselves. That, after all, is what invented nightmares are for.

Jon Pertwee's Doctor is wholly acceptable. Where William Hartnell was comically irrascible, and Patrick Troughton like a greying worried schoolboy, the newest recruit is suave and confident: obviously, a Harley Street doctor.

At the same time, he manages to look like Danny Kaye while grounding like Boris Karloff—and that's a mixture for the connoisseur.