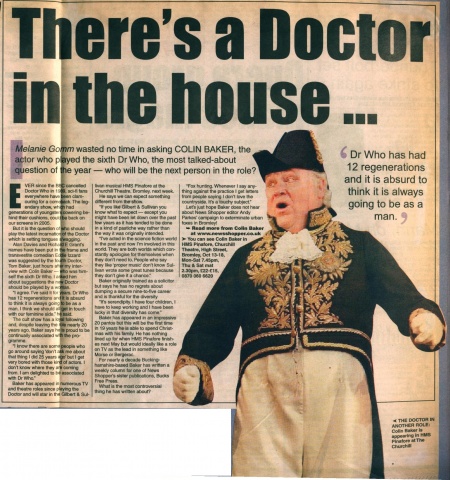 Melanie Gomm wasted no time in asking COLIN BAKER, the actor who played the sixth Dr Who, the most talked-about question of the year — who will be the next person in the role?

VER since the BBC cancelled Doctor Who in 1989, sci-fi fans everywhere have been clamouring for a comeback. The legendary show, which had generations of youngsters cowering behind their cushions, could be back on our screens in 2005.

But it is the question of Who should play the latest incarnation of the Doctor which is setting tongues a'wagging.

Alan Davies and Richard E Grant's names have been put in the frame and transvestite comedian Eddie Izzard was suggested by the fourth Doctor, Tom Baker, just hours after my interview with Colin Baker — who was himself the sixth Dr Who. I asked him about suggestions the new Doctor should be played by a woman.

"I agree. I've said it for years. Dr Who has 12 regenerations and it is absurd to think it is always going to be as a man. I think we should all get in touch with our feminine side," he said.

The cult show has a loyal following and, despite leaving the role nearly 20 years ago. Baker says he is proud to be continually associated with the programme.

"I know there are some people who go around saying 'don't ask me about that thing I did 25 years ago but I get very bored with those kind of actors. I don't know where they are coming from. I am delighted to be associated with Dr Who."

Baker has appeared in numerous TV and theatre roles since playing the Doctor and will star in the Gilbert & Sullivan musical HMS Pinafore at the Churchill Theatre, Bromley, next week.

He says we can expect something different from the show.

"If you like Gilbert & Sullivan you know what to expect — except you might have been let down over the past few years as it has tended to be done in a kind of pastiche way rather than the way it was originally intended.

"I've acted in the science fiction world in the past and now I'm involved in this world. They are both worlds which constantly apologise for themselves when they don't need to. People who say they like 'proper music' don't know Sullivan wrote some great tunes because they don't give it a chance."

"It's serendipity. I have four children, I have to keep working and I have been lucky in that diversity has come."

Baker has appeared in an impressive 20 pantos but this will be the first time in 19 years he is able to spend Christmas with his family. He has nothing lined up for when HMS Pinafore finishes next May but would ideally like a role on TV as the lead in something like Morse or Bergerac.

For nearly a decade Buckinghamshire-based Baker has written a weekly column for one of News Shopper's sister publications, Bucks Free Press.

What is the most controversial thing he has written about?

"Fox hunting. Whenever I say anything against the practice I get letters from people saying I don't love the countryside. It's a touchy subject!"

Caption: THE DOCTOR IN ANOTHER ROLE: Colin Baker Is appearing in HMS Pinafore at The Churchill