There's a new Who, and it's about time 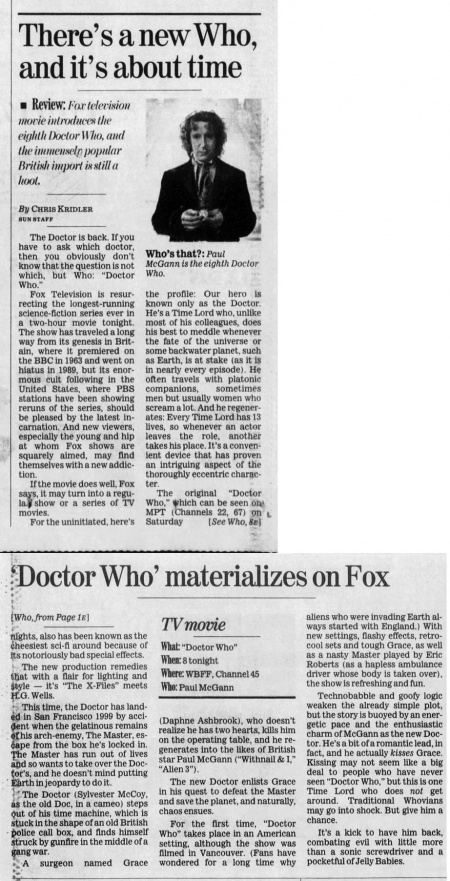 Review: Fox television movie introduces the eighth Doctor Who, and the immensely popular British import is still a hoot.

The Doctor is back. If you have to ask which doctor, then you obviously don't know that the question is not which, but Who: "Doctor Who."

Fox Television is resurrecting the longest-running science-fiction series ever in a two-hour movie tonight. The show has traveled a long way from its genesis in Britain, where it premiered on the BBC in 1963 and went on hiatus in 1989, but its enormous cult following in the United States, where PBS stations have been showing reruns of the series, should be pleased by the latest Incarnation. And new viewers, especially the young and hip at whom Fox shows are squarely aimed, may find themselves with a new addiction.

If the movie does well, Fox says, it may turn into a regular show or a series of TV movies.

For the uninitiated, here's the profile: Our hero is known only as the Doctor. He's a Time Lord who, unlike most of his colleagues, does his best to meddle whenever the fate of the universe or some backwater planet, such as Earth, is at stake (as it is in nearly every episode). He often travels with platonic companions, sometimes men but usually women who scream a lot. And he regenerates: Every Time Lord has 13 lives, so whenever an actor leaves the role, another takes his place. It's a convenient device that has proven an intriguing aspect of the thoroughly eccentric character.

The original "Doctor Who," which can be seen on, MPT (Channels 22, 67) on Saturday nights, also has been known as the cheesiest sci-fi around because of its notoriously bad special effects.

The new production remedies that with a flair for lighting and style — it's "The X-Files" meets H.G. Wells.

This time, the Doctor has landed in San Francisco 1999 by accident when the gelatinous remains of his arch-enemy, The Master, escape from the box he's locked in. The Master has run out of lives and so wants to take over the Doctor's, and he doesn't mind putting Earth in jeopardy to do it.

The Doctor (Sylvester McCoy, as the old Doc, in a cameo) steps out of his time machine, which is stuck in the shape of an old British police call box, and finds himself struck by gunfire in the middle of a gang war.

A surgeon named Grace (Daphne Ashbrook), who doesn't realize he has two hearts, kills him on the operating table, and he regenerates into the likes of British star Paul McGann ("Withnail & I," "Alien 3").

The new Doctor enlists Grace in his quest to defeat the Master and save the planet, and naturally, chaos ensues.

For the first time, "Doctor Who" takes place in an American setting, although the show was filmed in Vancouver. (Fans have wondered for a long time why aliens who were invading Earth always started with England.) With new settings, flashy effects, retro-cool sets and tough Grace, as well as a nasty Master played by Eric Roberts (as a hapless ambulance driver whose body is taken over), the show is refreshing and fun.

Technobabble and goofy logic weaken the already simple plot, but the story is buoyed by an energetic pace and the enthusiastic charm of McGann as the new Doctor. He's a bit of a romantic lead, in fact, and he actually kisses Grace. Kissing may not seem like a big deal to people who have never seen "Doctor Who," but this is one Time Lord who does not get around. Traditional Whovians may go into shock. But give him a chance.

It's a kick to have him back, combating evil with little more than a sonic screwdriver and a pocketful of Jelly Babies.

'Doctor Who' materializes on Fox

Who's that?: Paul McGann is the eighth Doctor Who.