There's trouble in store for Sarah 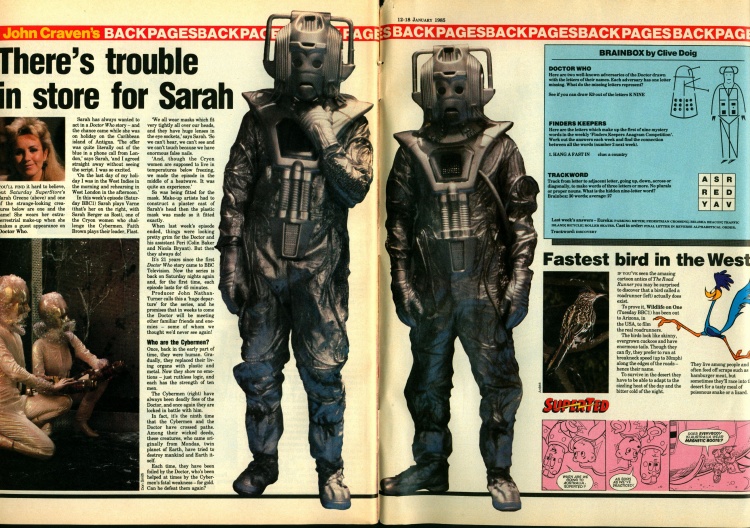 YOU'LL FIND it hard to believe, but Saturday SuperStore's Sarah Greene (above) and one of the strange-looking creatures below are one and the same! She wears her extraterrestrial make-up when she makes a guest appearance on Doctor Who.

Sarah has always wanted to act in a Doctor Who story — and the chance came while she was on holiday on the Caribbean island of Antigua. The offer was quite literally out of the blue in a phone call from London,' says Sarah, 'and I agreed straight away without seeing the script. I was so excited.

'On the last day of my holiday I was in the West Indies in the morning and rehearsing in West London in the afternoon.'

In this week's episode (Saturday BBC1) Sarah plays Varne (that's her on the right, with Sarah Berger as Rost), one of the Cryon women who challenge the Cybermen. Faith Brown plays their leader, Flast.

'We all wear masks which fit very tightly all over our heads, and they have huge lenses in the eye sockets,' says Sarah. 'So we can't hear, we can't see and we can't touch because we have enormous false nails.

'And, though the Cryon women are supposed to live in temperatures below freezing, we made the episode in the middle of a heatwave. It was quite an experience.'

So was being fitted for the mask. Make-up artists had to construct a plaster cast of Sarah's head then the plastic mask was made so it fitted exactly.

When last week's episode ended, things were looking pretty grim for the Doctor and his assistant Peri (Colin Baker and Nicola Bryant). But then they always do!

It's 21 years since the first Doctor Who story came to BBC Television. Now the series is back on Saturday nights again and, for the first time, each episode lasts for 45 minutes.

Producer John Nathan-Turner calls this a 'huge departure' for the series, and he promises that in weeks to come the Doctor will be meeting other familiar friends and enemies — some of whom we thought we'd never see again!

Who are the Cybermen? Once, back in the early part of time, they were human. Gradually, they replaced their living organs with plastic and metal. Now they show no emotions — just ruthless logic, and each has the strength of ten men.

The Cybermen (right) have always been deadly foes of the Doctor, and once again they are locked in battle with him.

In fact, it's the ninth time that the Cybermen and the Doctor have crossed paths. Among their wicked deeds, these creatures, who came originally from Mondas, twin planet of Earth, have tried to destroy mankind and Earth itself.

Each time, they have been foiled by the Doctor, who's been E helped at times by the Cybermen's fatal weakness — for gold. Can he defeat them again?

Here are two well-known adversaries of the Doctor drawn with the letters of their names. Each adversary has one letter missing. What do the missing letters represent? See if you can draw K9 out of the letters K NINE

Here are the letters which make up the first of nine mystery words in the weekly 'Finders Keepers Anagram Competition'. Work out the answers each week and find the connection between all the words (number 2 next week).