There is one great writer who hasn't been visited by Dr Who: Jane Austen 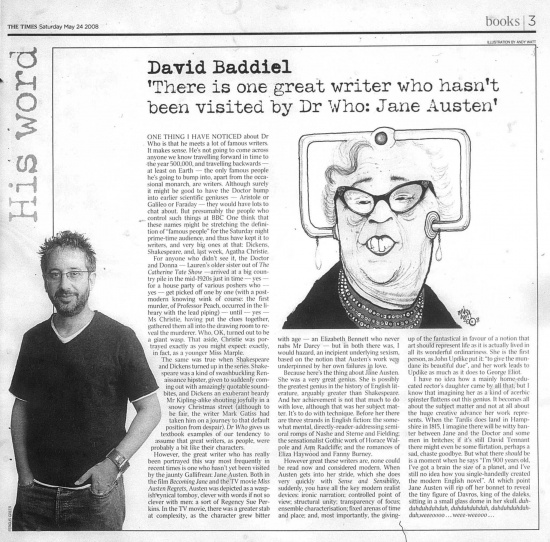 ONE THING I HAVE NOTICED about Dr Who is that he meets a lot of famous writers. It makes sense. He's not going to come across anyone we know travelling forward in time to .the year 500,000, and travelling backwards —at least on Earth — the only famous people he's going to bump into, apart from the occasional monarch, are writers. Although surely it might be good to have the Doctor bump into earlier scientific geniuses — Aristole or Galileo or Faraday — they would have lots to chat about. But presumably the people who control such things at BBC One think that these names might be stretching the definition of "famous people" for the Saturday night prime-time audience, and thus have kept it to writers, and very big ones at that: Dickens, Shakespeare, and, last week, Agatha Christie.

For anyone who didn't see it, the Doctor and Donna — Lauren's older sister out of The Catherine Tate Show —arrived at a big country pile in the mid-1920s just in time — yes — for a house party of various pushers who —yes — get picked off one by one (with a postmodern knowing wink of course: the first murder, of Professor Peach, occurred in the library with the lead piping) — until — yes — Ms Christie, having put the clues together, gathered them all into the drawing room to reveal the murderer. Who, OK, turned out to be a giant wasp. That aside, Christie was portrayed exactly as you might expect: exactly, in fact, as a younger Miss Marple.

The same was true when Shakespeare and Dickens turned up in the series. Shakespeare was a kind of swashbuckling Renaissance hipster, given to suddenly coming out with amazingly quotable sound-bites, and Dickens an exuberant beardy Mr Kipling-alike shouting joyfully in a snowy Christmas street (although to be fair, the writer Mark Gatiss had taken him on a journey to that default position from despair). Dr Who gives us textbook examples of our tendency to assume that great writers, as people, were probably a bit like their characters.

However, the great writer who has really been portrayed this way most frequently in recent times is one who hasn't yet been visited by the jaunty Gallifrean: Jane Austen. Both in the film Becoming Jane and the TV movie Miss Austen Regrets, Austen was depicted as a waspish cynical tomboy, clever with words if not so clever with men: a sort of Regency Sue Perkins. In the TV movie, there was a greater stab at complexity, as the character grew bitter with age — an Elizabeth Bennett who never nabs Mr Darcy — but in both there was. I would hazard, an incipient underlying sexism, based on the notion that Austen's work was underpinned by her own failures in love.

Because here's the thing about Jane Austen. She was a very great genius. She is possibly the greatest genius in the history of English literature. arguably greater than Shakespeare. And her achievement is not that much to do with love, although that was her subject matter. It's to do with technique. Before her there are three strands in English fiction: the somewhat mental, directly-reader-addressing semi-oral romps of Nashe and Sterne and Fielding; the sensationalist Gothic work of Horace Walpole and Alp Radcliffe-, and the romances of Eliot Haywood and Fanny Burney.

However great these writers are, none could be read now and considered modem. When Austen gets into her stride, which she does very quickly with Sense and Sensibility, suddenly, you have all the key modem realist devices: ironic narration; controlled point of view, structural unity; transparency of focus; ensemble characterisation; fixed arenas of time and place; and, most importantly, the giving-up of the fantastical in favour of a nation that art should represent life as it is actually lived in all its wonderful ordinariness. She is the first person, as John Updike put it "to give the mundane its beautiful due". and her work leads to Updike as much as it does to George Eliot.

I have no idea how a mainly home-educated rector's daughter came by all that; but I know that imagining her as a kind of acerbic spinster flattens out this genius. It becomes all about the subject matter and not at all about the huge creative advance her work represents. When the Tardis does land in Hampshire in 1815, I imagine there will be witty banter between Jane and the Doctor and some men in britches; if it's still David Tennant there might even be some flirtation, perhaps a sad, chaste goodbye. But what there should be is a moment when he says "I'm 900 years old, I've got a brain the size of a planet, and I've still no idea how you single-handedly created the modern English novel". At which point Jane Austen will rip off her bonnet to reveal the tiny figure of Davros. king of the daleks. sitting in a small glass dome in her skull. duh-duhduhduhduh, duhduhduhduh, duhduhduhduh-dult,weeect000 ...weee-weeooo...