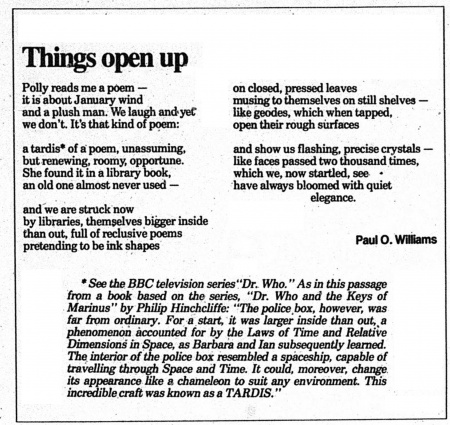 Polly reads me a poem - it is about January wind and a plush man. We laugh and yet we don't. It's that kind of poem: a tardis* of a poem, unassuming, but renewing, roomy, opportune.

She found it in a library book, an old one almost never used - and we are struck now by libraries, themselves bigger inside than out, full of reclusive poems pretending to be ink shapes on closed, pressed leaves musing to themselves on still shelves - like geodes, which when tapped, open their rough surfaces and show us flashing, precise crystals - like faces passed two thousand times, which we, now startled, see have always bloomed with quiet elegance.

*See the BBC television series "Dr. Who." As in this passage from a book based on the series, "The Keys of Marinus" by Philip Hinchcliffe: "The police box, however, was far from ordinary. For a start, it was larger inside than out, a phenomenon accounted for by the Laws of Time and Relative Dimensions in Space, as Barbara and Ian subsequently learned. The interior of the police box resembled a spaceship, capable of travelling through Space and Time. It could, moreover, change its appearance like a chameleon to suit any environment. This incredible craft was known as a TARDIS."