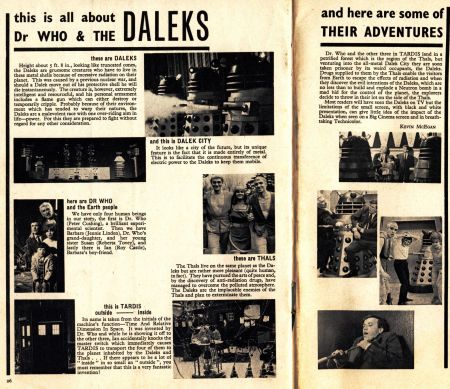 Height about 5 ft. 8 in., looking like truncated cones, the Daleks are gruesome creatures who have to live in these metal shells because of excessive radiation on their planet. This was caused by a previous nuclear war, and should a Dalek move out of his protective shell he will die instantaneously. The creature is, however, extremely intelligent and resourceful, and his personal armament includes a flame gun which can either destroy or temporarily cripple. Probably because of their environment which has tended to warp their natures, the Daleks are a malevolent race with one over-riding aim in life—power. For this they are prepared to fight without regard for any other consideration.

and this is DALEK city

It looks like a city of the future, but its unique feature is the fact that it is made entirely of metal. This is to facilitate the continuous transference of electric power to the Daleks to keep them mobile.

here are DR WHO and the Earth people

We have only four human beings in our story, the first is Dr. Who (Peter Cushing), a brilliant experimental scientist. Then we have Barbara (Jennie Linden), Dr. Who's grand-daughter, and her young sister Susan (Roberta Tovey), and lastly there is Ian (Roy Castle), Barbara's boy-friend.

The Thals live on the same planet as the Da-leks but are rather more pleasant (quite human, in fact). They have pursued the arts of peace and, by the discovery of anti-radiation drugs, have managed to overcome the polluted atmosphere. The Daleks are the implacable enemies of the Thals and plan to exterminate them.

this is TARDIS outside - inside

Its name is taken from the initials of the machine's function—Time And Relative Dimension In Space. It was invented by Dr. Who and while he is showing it off to the other three, Ian accidentally knocks the master switch which immediately causes TARDIS to transport the four of them to the planet inhabited by the Daleks and Thais ... If there appears to be a lot of " inside " in so small an " outside ", you must remember that this is a very fantastic invention!

Dr. Who and the other three in TARDIS land in a petrified forest which is the region of the Thals, but venturing into the all-metal Dalek City they are soon taken prisoner by its weird occupants, the Daleks. Drugs supplied to them by the Thais enable the visitors from Earth to escape the effects of radiation and when they discover the evil intentions of the Daleks, which are no less than to build and explode a Neutron bomb in a mad bid for the control of the planet, the explorers decide to throw in their lot on the side of the Thals.

Most readers will have seen the Daleks on TV but the limitations of the small screen, with black and white presentation, can give little idea of the impact of the Daleks when seen on a Big Cinema screen and in breathtaking Technicolor.