This man builds spaceships for a living! 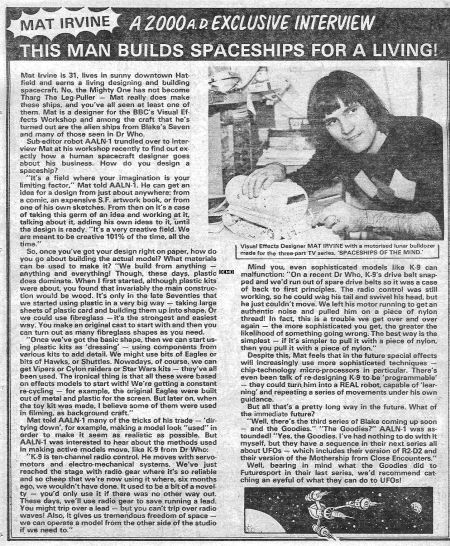 Mat Irvine is 31, lives in sunny downtown Hatfield and earns a living designing and building spacecraft No, the Mighty One has not become Tharg The Leg-Puller — Mat really does make these ships, and you've all seen at least one of them. Mat is a designer for the BBC's Visual Effects Workshop and among the craft that he's turned out are the alien ships from Blake's Seven and many of those seen in Dr Who.

Sub-editor robot AALN-1 trundled over to interview Mat at his workshop recently to find out exactly how a human spacecraft designer goes about his business. How do you design a spaceship?

"It's a field where your imagination is your limiting factor," Mat told AALN-1. He can get an idea for a design from just about anywhere: from a comic, an expensive S.F. artwork book, or from one of his own sketches. From then on it's a case of taking this germ of an idea and working at it, talking about it, adding his own ideas to it, until the design is ready. "It's a very creative field. We are meant to be creative 101% of the time, all the time."

So, once you've got your design right on paper, how do you go about building the actual model? What materials can be used to make it? "We build from anything -anything and everything! Though, these days, plastic does dominate. When I first started, although plastic kits were about, you found that invariably the main construction would be wood. It's only in the late Seventies that we started using plastic in a very big way — taking large sheets of plastic card and building them up into shape. Or we could use fibreglass — it's the strongest and easiest way. You make an original cast to start with and then you can turn out as many fibreglass shapes as you need. "Once we've got the basic shape, then we can start using plastic kits as 'dressing' — using components from various kits to add detail. We might use bits of Eagles or bits of Hawks, or Shuttles. Nowadays, of course, we can get Vipers or Cylon raiders or Star Wars kits — they've all been used. The ironical thing is that all these were based on effects models to start with! We're getting a constant re-cycling — for example, the original Eagles were built out of metal and plastic for the screen. But later on, when the toy kit was made, I believe some of them were used in filming, as background craft."

Mat told AALN-1 many of the tricks of his trade — 'dirtying down', for example, making a model look "used" in order to make it seem as realistic as possible. But AALN-1 was interested to hear about the methods used in making active models move, like K-9 from Dr Who:

"K-9 is ten-channel radio control. He moves with servomotors and electro-mechanical systems. We've just reached the stage with radio gear where it's so reliable and so cheap that we're now using it where, six months ago, we wouldn't have done. It used to be a bit of a novelty — you'd only use it if there was no other way out. These days, we'll use radio gear to save running a lead. You might trip over a lead — but you can't trip over radio waves! Also, it gives us tremendous freedom of space — we can operate a model from the other side of the studio if, we need to."

Mind you, even sophisticated models like K-9 can malfunction: "On a recent Dr Who, K-9's drive belt snapped and we'd run out of spare drive belts so it was a case of back to first principles. The radio control was still working, so he could wag his tail and swivel his head, but he just couldn't move. We left his motor running to get an authentic noise and pulled him on a piece of nylon thread! In fact, this is a trouble we get over and over again — the more sophisticated you get, the greater the likelihood of something going wrong. The best way is the simplest — if it's simpler to pull it with a piece of nylon, then you pull it with a piece of nylon."

Despite this, Mat feels that in the future special effects will increasingly use more sophisticated techniques — chip-technology micro-processors in particular. There's even been talk of re-designing K-9 to be 'programmable' — they could turn him into a REAL robot capable of 'learning' and repeating a series of movements under his own guidance.

But al] that's a pretty long way in the future. What of the immediate future?

"Well there's the third series of Blake coming up soon — and the Goodies." "The Goodies?" AALN-1 was astounded! "Yes, the Goodies. I've had nothing to do with it myself, but they have a sequence in their next series all about UFOs — which includes their version of R2-D2 and their version of the Mothership from Close Encounters." Well, bearing in mind what the Goodies did to Futuresport in their last series, we'd recommend catching an eyeful of what they can do to UFOs!

Caption: Visual Effects Designer MAT IRVINE with a motorized lunar bulldozer made for the three-part TV series, 'SPACESHIPS OF THE MIND.'