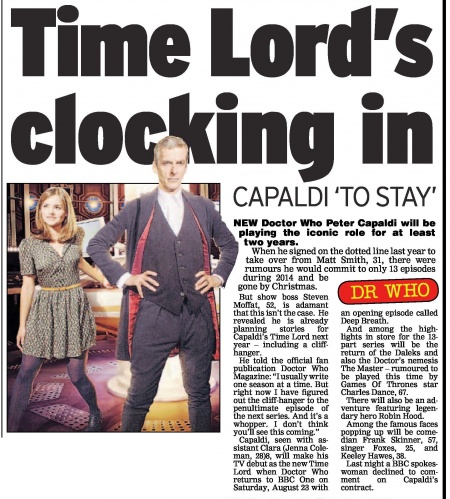 NEW Doctor Who Peter Capaldi will be playing the iconic role for at least two years.

When he signed on the dotted line last year to take over from Matt Smith, 31, there were rumours he would commit to only 13 episodes during 2014 and be gone by Christmas.

But show boss Steven Moffat, 52, is adamant that this isn't the case. He revealed he is already planning stories for Capaldi's Time Lord next year — including a cliffhanger.

He told the official fan publication Doctor Who Magazine: "I usually write one season at a time. But right now I have figured out the cliff-hanger to the penultimate episode of the next series. And it's a whopper. I don't think you'll see this coming."

Capaldi, seen with assistant Clara (Jenna Coleman, 28)8, will make his TV debut as the new Time Lord when Doctor Who returns to BBC One on Saturday, August 23 with an opening episode called Deep Breath.

And among the highlights in store for the 13-part series will be the return of the Daleks and also the Doctor's nemesis The Master — rumoured to be played this time by Games Of Thrones star Charles Dance, 67.

There will also be an adventure featuring legendary hero Robin Hood. Among the famous faces popping up will be comedian Frank Skinner, 57, singer Foxes, 25, and Keeley Hawes, 38.