Time is on side of new Doctor Who 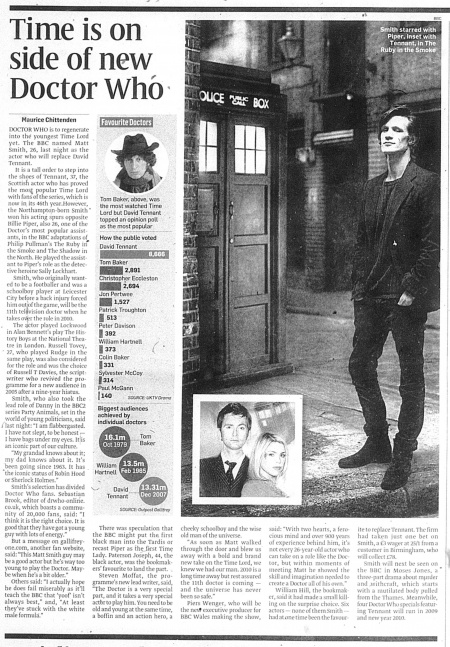 DOCTOR WHO is to regenerate into the youngest Time Lord yet. The BBC named Matt Smith, 26, last night as the actor who will replace David Tennant.

It is a tall order to step into the shoes of Tennant, 37, the Scottish actor who has proved the most popular Time Lord with fans of the series, which is now in its 46th year. However, the Northampton-born Smith won his acting spurs opposite Billie Piper, also 26, one of the Doctor's most popular assistants, in the BBC adaptations of, Philip Pullman's the Ruby in the Smoke and The Shadow in the North. Ile played the assistant to Piper's role as the detective heroine Sally Lockhart.

Smith, who originally wanted to be a footballer and was a schoolboy player at Leicester City before a back injury forced him out of the game, will be the 11th television doctor when he takes over the role in 2010.

The actor played Lockwood in Alan Bennett's play The History Boys at the National Theatre in London. Russell Tovey, 27, who played Budge in the same play, was also considered for the role and was the choice of Russell T Davies, the scriptwriter who revived the programme for a new audience in 2005 after a nine-year hiatus.

Smith, who also took the lead role of Danny in the BBC2 series Party Animals, set in the world of young politicians, said last night: "I am flabbergasted. I have not slept, to be honest--have bags under my eyes. It is an iconic part of our culture.

Smith's selection has divided Doctor Who fans. Sebastian Brook, editor of drwho-online.co.uk, which boasts a community of 20,000 fans, said: "I think it is the right choice. It is good that they have got a young guy. with lots of energy."

But a message on gallifreyone.com, another fan website, said: "This Matt Smith guy may be a good actor but he's way too young to play the Doctor. Maybe when he's a bit older." Others said: "I actually hope he does fail miserably as it'll teach the BBC that 'yoof' isn't always best," and, "At least they've stuck with the white male formula."

There was speculation that the BBC might put the first black man into the Tardis or recast Piper as the first Time Lady. Paterson Joseph, 44, the black actor, was the bookmakers' favourite to land the part. Steven Moffat, the programme's new lead writer, said, 'The Doctor is a very special part, and it takes a very special actor to play him. You need to be old and young at the same time, a boffin and an action hero, a cheeky schoolboy and the wise old man of the universe.

"As soon as Matt walked through the door and blew us away with a bold and brand new take on the Time Lord, we knew we had our man. 2010 is a long time away but rest assured :he 11th doctor is coming — and the universe has never been so safe."

Piers Wenger, who will be the new executive producer for BBC Wales making the show, said: "With two hearts, a ferocious mind and over 900 years of experience behind him, it's not every 26-year-old actor who can take on a role like the Doctor, but within moments of meeting Matt he showed the skill and imagination needed to create a Doctor all of his own."

William Hill, the bookmaker, said it had made a small killing on the surprise choice. Six actors— none of them Smith — had at one time been the favourite to replace Tennant. The firm had taken just one bet on Smith, a £3 wager at 25/1 from a customer in Birmingham, who will collect £78.

Smith will next be seen on the BBC in in Moses Jones, a three-part drama about murder and withcraft, which starts with a mutilated body pulled from the Thames. Meanwhile, four Doctor Who specials featuring Tennant will run in 2009 and new year 2010.

Tom Baker, above, was the most watched Time Lord but David Tennant topped an opinion poll as the most popular

How the public voted

Caption: Smith starred with Piper, inset with Tennant, In The Ruby in the Smoke