Time runs out for Doctor Who's Clara 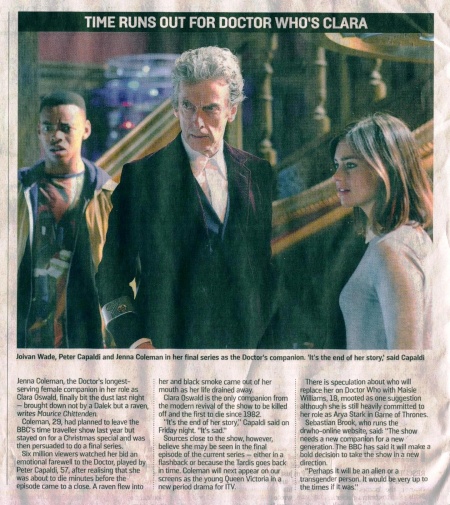 Jenna Coleman, the Doctor's longest-serving female companion in her role as Clara Oswald, finally bit the dust last night — brought down not by a Dalek but a raven, writes Maurice Chittenden.

Coleman, 29, had planned to leave the BBC's time traveller show last year but stayed on for a Christmas special and was then persuaded to do a final series.

Six million viewers watched her bid an emotional farewell to the Doctor, played by Peter Capaldi, 57, after realising that she was about to die minutes before the episode came to a close. A raven flew into her and black smoke came out of her mouth as her life drained away.

Clara Oswald is the only companion from the modern revival of the show to he killed off and the first to die since 1982.

"It's the end of her story," Capaldi said on Friday night. "It's sad."

Sources close to the show, however, believe she may be seen in the final episode of the current series — either in a flashback or because the Tardis goes back in time. Coleman will next appear on our screens as the young Queen Victoria in a new period drama for ITV.

There is speculation about who will replace her on Doctor Who with Maisie Williams, 18, mooted as one suggestion although she is still heavily committed to her role as Arya Stark in Game of Thrones.

Sebastian Brook, who runs the drwho-online website, said: "The show needs a new companion for a new generation. The BBC has said it will make a bold decision to take the show in a new direction.

"Perhaps it will he an alien or a transgender person. It would be very up to the times if it was."

Joivan Wade, Peter Capaldi and Jenna Coleman in her final series as the Doctor's companion. 'It's the end of her story,' said Capaldi